2017 Annual Meeting: The Future of Globalism and Multilateralism 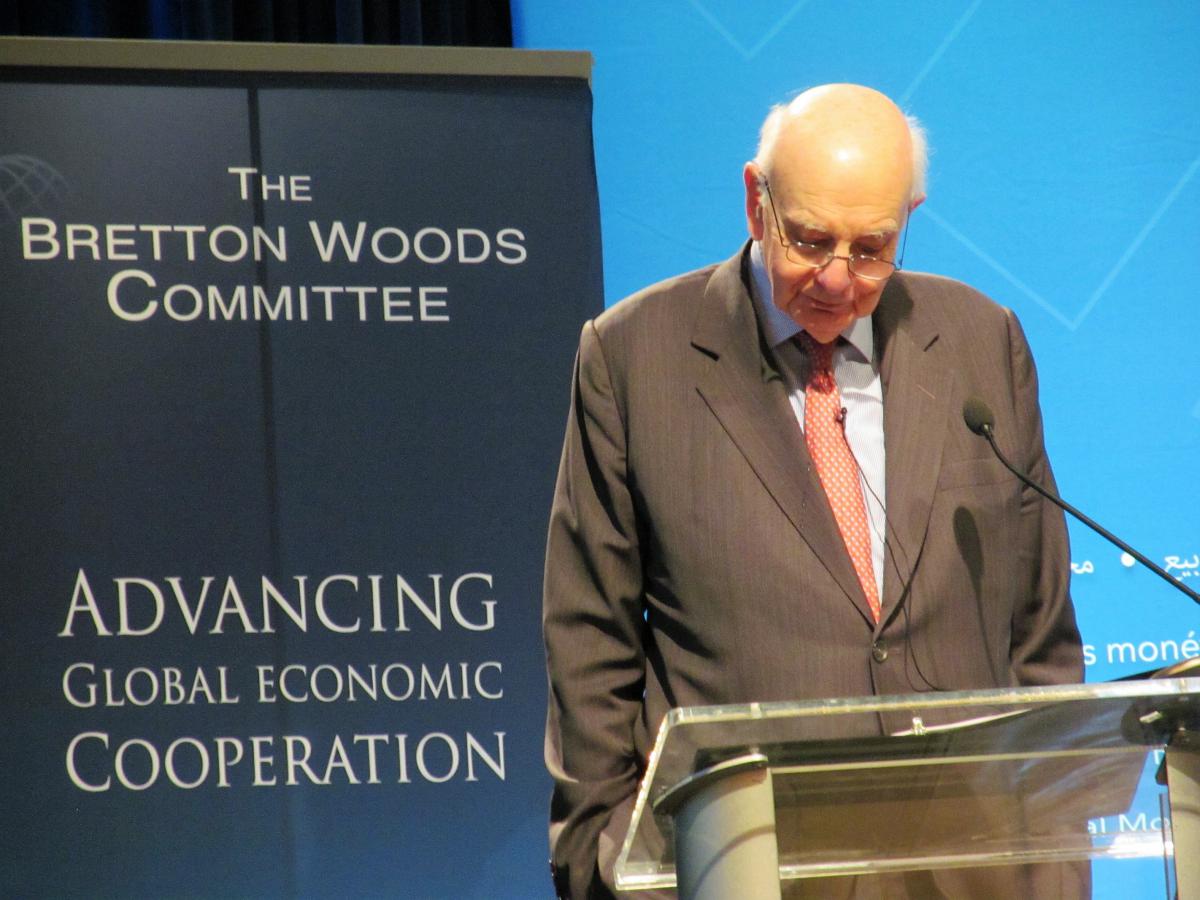 On April 19, 2017, over 175 Committee members and friends – including leaders from both public and private sectors as well as academia and civil society – gathered at the International Monetary Fund headquarters in Washington, D.C. for the 2017 Bretton Woods Committee Annual Meeting. This year’s theme, The Future of Globalism and Multilateralism, focused on the future of the Bretton Woods system in a changing geopolitical landscape.

The first segment featured a moderated discussion between International Monetary Fund Managing Director Christine Lagarde and Bretton Woods Committee Advisory Council member William R. Rhodes. Lagarde began the Annual Meeting on an optimistic note with the IMF’s latest projections on the global economic outlook, and indicated, “this is the first time in many, updated projections that we are revising upward with steady world economic growth moving from 3.1 percent last year to a forecast of 3.5 percent growth for this year and 3.6 percent for 2018.” Despite this upward projection, Lagarde warned against the effects of sustained low productivity growth and called for policies to fuel innovation through a combination of public spending on research and development.

Rhodes asked Lagarde to provide insight into the mounting global concern regarding China’s increasing debt and the ongoing Greece situation. In reference to China, Lagarde commented that the necessary reform policies likely won’t be put into place until after the 19th Party Congress in November/December but did highlight small improvements in regards to China’s coal and steel sectors’ excess capacity. On Greece, Lagarde remained hopeful that tax and pension reform would be addressed, and subsequently, the issue of debt sustainability, restructuring, and relief could be resolved. Finally, Lagarde was asked by an audience participant to address the outlook for Mexico, to which she responded future policy implementation would likely depend upon the direction that the US-Mexico relationship takes and how the renegotiation of NAFTA unfolds.

In the second segment, World Bank Group CEO Kristalina Georgieva was joined by moderator Guillermo Ortiz, Chairman of Latin America, BTG Pactual to discuss her role as the inaugural CEO of the World Bank Group as well as the World Bank’s role in a shifting development landscape. Georgieva expressed concern over global uncertainty and what she called, “the mother of all crises, the crisis of confidence,” and its impact on investment, risk perception, and negative interest rates. Referencing the World Bank and regional MDBs’ initiative, “From Billions to Trillions,” Georgieva spoke about the need to catalyze dormant private sector financial resources to flow into developing markets, citing Vietnamese solar infrastructure projects as an example, and spoke on the need for action to address the famines in Yemen, Nigeria, South Sudan and Somalia. Finally, Georgieva expressed her belief that the Trump administration’s “America First” agenda would be better served by closer engagement with the World Bank Group, and added that she has not heard anyone from the administration say that they want to disengage.

The third segment featured a discussion between Asian Development Bank President Takehiko Nakao and Bretton Woods Committee Co-Chair Jim Kolbe. Nakao opened the discussion by commenting on the progress the Asian Development Bank – celebrating their 50th Anniversary – has made since its inception. He highlighted an expanded membership, a pivot toward private sector resource mobilization to complement ADB’s public financing, and the organization’s contribution to Asia’s current growth conditions. Nakao then highlighted some of Asia’s ongoing challenges to be addressed, including, China’s continued transition from a manufacturing economy to a consumption and service-based economy, the sustainability of India’s new tax system, and overall regional economic integration. He went on to dismiss the growing concern of secular stagnation in the region and stressed the need for openness in order to maintain Asia’s 6% growth rate. In addressing the challenges of populism, Nakao admitted that, “some people were not gaining as much benefit as others,” from globalization, and that a strong sovereign state was needed alongside multilateral cooperation to provide prosperity for all Asian citizens.

Taylor optimistically highlighted the impact of recent policy changes in the United States and was hopeful that these policies would accelerate domestic economic growth above the annual 2% rate that has been prevalent since 2010. On issues such as U.S. tax reform, regulatory reform, and monetary reform, Taylor argued, “there is a lot going on right now, but there is certainly more agreement [towards these policy areas] than there has been in the past couple of years.” He asserted that consensus is essential for crafting effective policy in an uncertain environment.

Similarly, Tharman discussed the issue of U.S. uncertainty and its implications for the rest of the world. He stressed the importance of crafting policy that seeks to shrink the growing economic divergence between and within countries, cities, and communities. “Too many countries are stuck in the old model of globalization,” Tharman contended. “We must work to bring these communities into the new model by integrating them into global value chains.” His primary policy recommendation centered on creating learning and teaching communities to instill a discipline of lifelong learning, which would in turn address the innovation gap and lead to higher productivity and inclusive growth.

The theme of global uncertainty was echoed in Rubio’s remarks. According to Rubio, uncertainty has made it difficult to craft policy in Mexico leading to some short-term disruptions. However, she stated “in recent months, there has been an outpour of dialogue between Mexico and the U.S. [...] uncertainty within our bilateral relationship is something of a novelty and how we deal with it will set the stage for future cooperation.” On the subject of low productivity, specifically in Latin America, Rubio highlighted the importance of bridging the gender gap and bringing youth and women into the formal economy in order to spark productivity.

Woodman also addressed uncertainty in the United Kingdom (UK)/European context and underscored the implications the upcoming UK general elections would have on minimizing Brexit uncertainty. “The government elected on June 8th will have a clear mandate,” she optimistically stated, “and be able to negotiate with an endorsement from the UK population.” On the theme of low productivity, Woodman underscored the mounting challenges facing the UK for the next few years in relation to Brexit, specifically that negotiating new access arrangements to European Union (EU) markets will only augment low productivity. Overall, all panelists agreed that current political uncertainty has contributed to market volatility but were hopeful for increased consensus and cooperation going forward.

Segment 5: The Future of the Global Financial System

The final segment featured remarks by former Federal Reserve Chairman Paul A. Volcker. His remarks centered on the continued importance of multilateralism and the Bretton Woods system, saying “Bretton Woods is not a particular institution, it is an ideal, a symbol, of the never-ending need for sovereign nations to work together to support open markets.” Volcker, in his remarks, emphasized the need to sustain coordinated reform efforts in an environment of waning commitment. “Relaxation of key reforms and the temptation to retreat inward into idiosyncratic domestic approaches needs to be resisted,” he asserted. Volcker defended aspects of the Dodd-Frank financial reform legislation in the United States and advocated for sustained regulatory oversight in order to safeguard the global economy against future financial distress. He argued that any claims that the legislation has caused damage to American markets do not align with the evidence at hand – near full employment rate, close to stable prices, record bank profits, returns on banking assets exceeding one percent, among other evidence. Likewise, Volcker defended the impact of the so-called Volcker Rule by saying that proprietary trading units now are “free to trade, to speculate, and to fail outside the official safety net.”

Volcker’s remarks were followed by a candid discussion with Bretton Woods Committee Advisory Council member William R. Rhodes. During the discussion, he stated his incredulity towards those who claim that durable financial regulatory reform can be developed within a vacuum, insulated from the global economy. He recalled the degree of international cooperation that was necessary to create Dodd-Frank insisting, “we could have never reached an agreement on areas such as capital requirements, without bringing in the rest of the world.” Finally, he warned against fragmentation and discontinuity in policymaking concluding, “I hope we have learned the lesson that financial distress cannot be localized, that markets are inextricably interlinked.”

Special thanks to our Sponsor:
SICPA Holdings