On April 10, 2019, the Bretton Woods Committee held its 36th Annual Meeting at the IMF Headquarters in Washington, DC where over 200 Committee members and global leaders attended. This year marks the 75th anniversary of the 1944 Bretton Woods Conference, and the Committee convened a line-up of experts in the fields of international finance, development, and trade to generate bold ideas needed to forge a global economic system that works for the future while drawing lessons from the past. This year’s conversation – Honoring 75 Years: Forging the Future of Bretton Woods – prompted dialogue around the roles of the IMF, World Bank, and WTO in the global economy and how these institutions must evolve to be fit-for-purpose into the future. 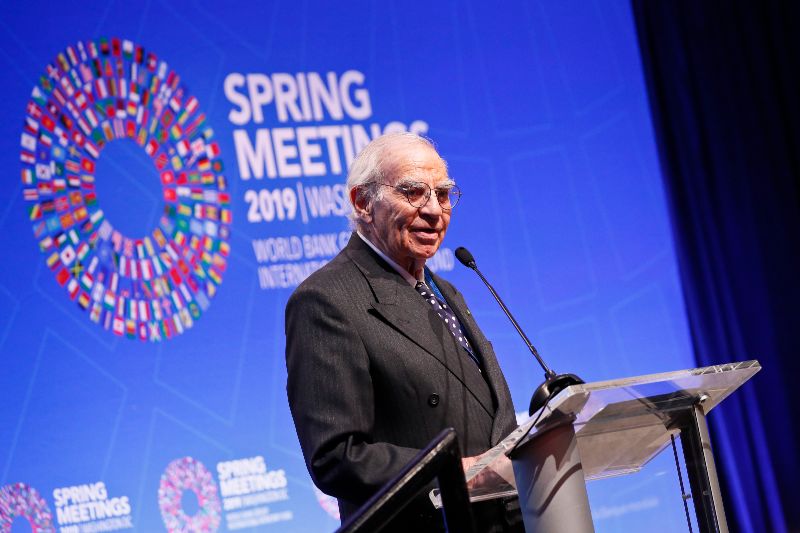 Bretton Woods Committee International Council Chair, Richard A. Debs, the meeting by calling attention to the 75th anniversary of the 1944 Bretton Woods Conference. He reiterated that the mission of Bretton [email protected] is to recognize and draw upon the history of the Bretton Woods System to ensure that its basic objective of international economic and financial cooperation is maintained and strengthened, and to support the roles of the IMF, the World Bank, and the WTO. Since Bretton [email protected] was announced at the 2018 Annual Meeting, the Committee has called upon global thought leaders to provide forward-looking recommendations for each of these institutions, which have been collected into a compendium of essays to be published by the Committee in July 2019. 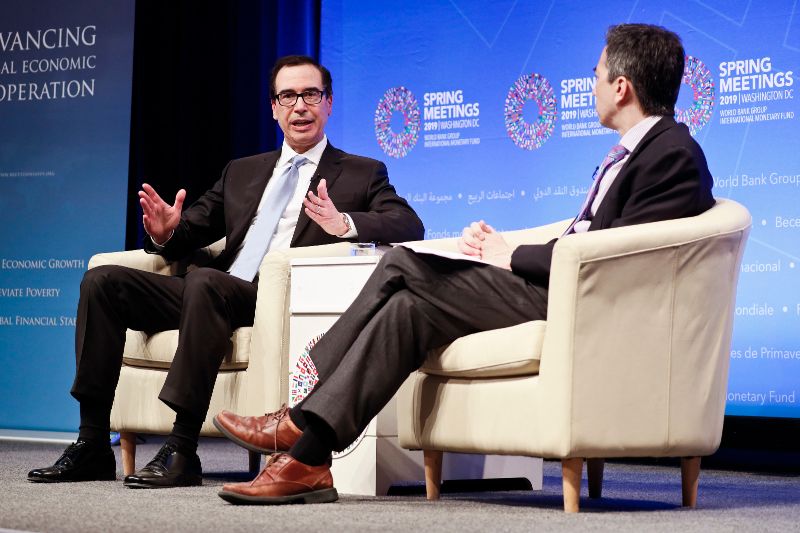 In his conversation with Greg Ip of The Wall Street Journal, U.S. Treasury Secretary Steven Mnuchin emphasized that, as the largest shareholder in the IMF, the U.S. has a vested interest in ensuring that the institution is adequately capitalized. He noted, however, that the Trump administration intends to employ the NAB and bilateral borrowing agreements as tools of capital increase rather than quota reform, emphasizing that “We absolutely have no intention of giving up the veto.” He did acknowledge the importance of collaborative leadership of regional development banks and financial institutions, as well as an expectation that the World Bank and IMF will continue to partner with these organizations to best serve the needs of developing economies. The conversation turned to projections for U.S. economic growth in response to the IMF’s recent downward revision of global growth forecasts for the rest of 2019 and 2020. Mnuchin emphasized that the U.S. economy consistently outperforms IMF projections, and described it as “the bright spot of global economic growth.” He added that he and U.S. Trade Representative Robert Lighthizer are working tirelessly to address one of the primary variables impacting the global slowdown: U.S. trade tensions with China. Trade deal negotiations are underway, and Mnuchin stated that, while he could not speak to the details, the deal is anticipated to be mutually beneficial to the American agricultural and industrial sectors and to China’s growing middle class. “The number one objective we have across all of our trading partners is that we have fair and free trade, which we believe will lead to balanced trade,” he stated. Watch the segment here. 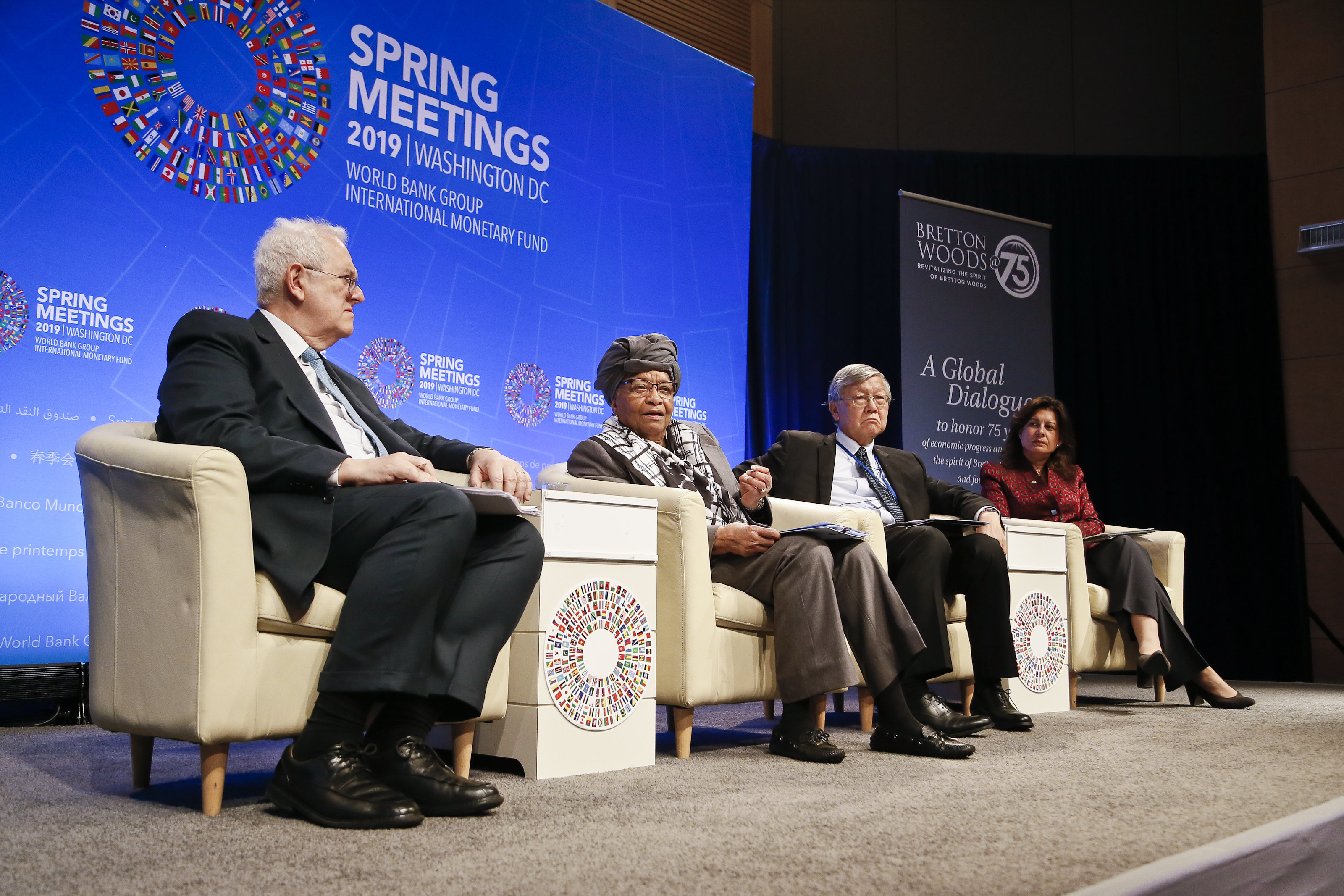 THE GLOBAL ECONOMY OF TOMORROW

Panelists agreed that the forces of technological advancement, demographic shifts, and climate change are the most pressing issues facing the global economy today and into the future. Perhaps most pressing, climate change has the potential to “undermine much of the development and reverse the progress that has been made in many countries,” stated Ellen Johnson Sirleaf, Former President of the Republic of Liberia, in her opening remarks on a panel moderated by José Antonio Ocampo, Professor of Professional Practice in International and Public Affairs at Columbia University. Sirleaf emphasized the importance of redefining the primary objectives of the World Bank and IMF to include peacebuilding and institution-building efforts in fragile states to create a foundation for sustainable development. Andrew Sheng, Distinguished Fellow of the Asia Global Institute at the University of Hong Kong, added that another primary objective of the institutions should be to implement a Global Green New Deal to fund climate change mitigation efforts as a global public good. However, he expressed concern that Bretton Woods institutions are severely resource-constrained relative to the scale of investment necessary to address these issues.

Ceyla Pazarbasioglu, Vice President of Equitable Growth, Finance and Institutions with the World Bank Group, indicated that the Bank recognizes that it is crucial to leverage private sector funds to help fill this resource gap. However, she still sees a significant role for the World Bank and other Bretton Woods institutions in addressing these global problems: “These institutions have a long institutional memory of what works in different parts of the world and how that can be tailored.” She added that, to ensure limited funds are allocated appropriately, it is crucial to increase transparency of public expenditures and the composition of sovereign debt. Ocampo and Sirleaf agreed that addressing these challenges will first require the international development community to address the trend toward isolationism and populism in advanced economies. Sheng emphasized the importance of redefining the roles of the Bretton Woods institutions to “mobilize resources in a more democratic way.” Sirleaf and Pazarbasioglu agreed that to this end, sustainable development programs are best designed in-country with technical capacity-building support from the World Bank and IMF. Watch the segment here. 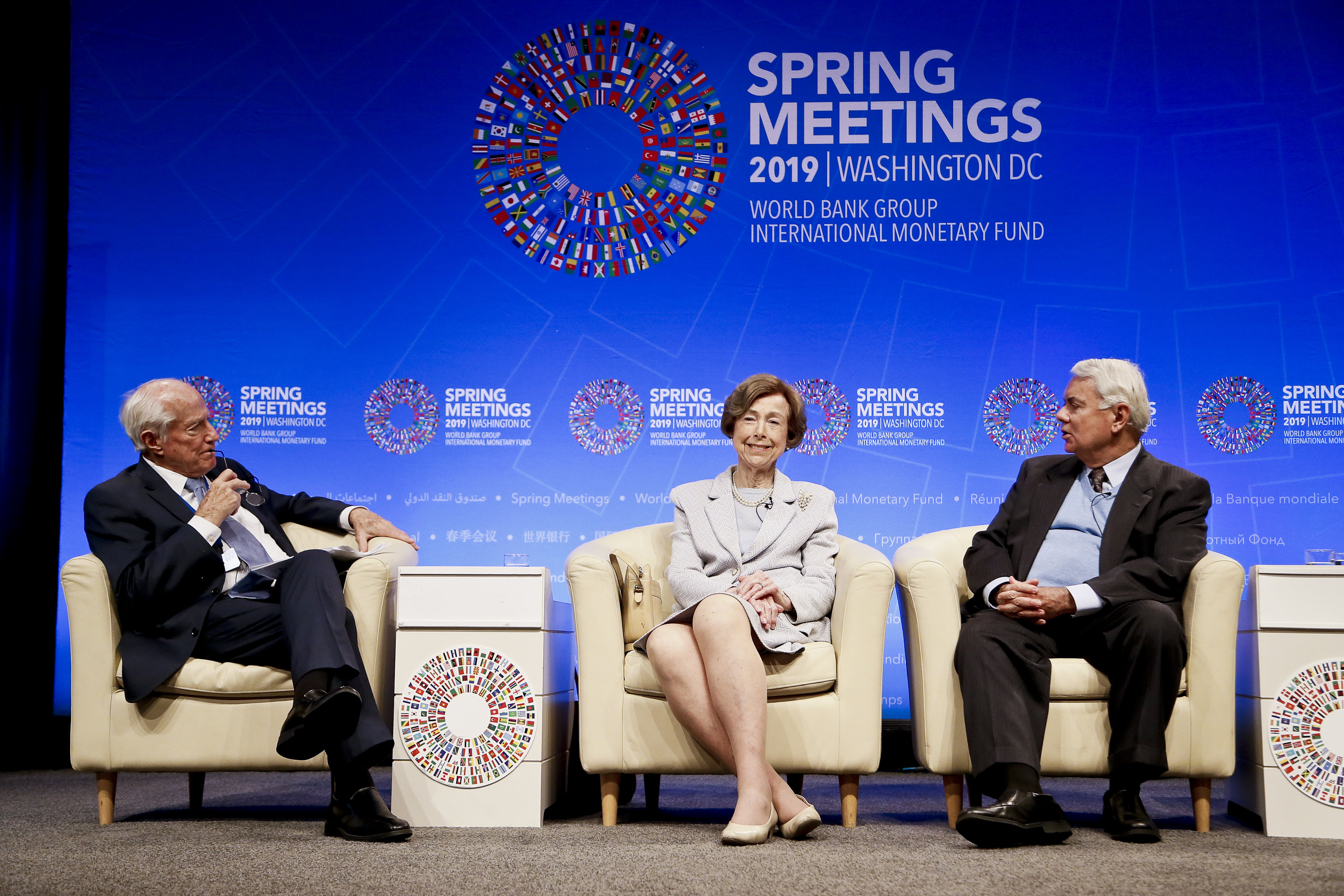 INTERNATIONAL TRADE: WHERE TO GO FROM HERE?

“I think this is the most uncertain of times that I’ve ever experienced on the U.S. agenda for trade,” said Carla Hills, Chair and CEO of Hills and Company International Consultants in a conversation moderated by Jim Kolbe, Co-Chair of the Bretton Woods Committee. She commented that she thinks it is unlikely that the United States-Mexico-Canada Agreement will be approved this year and predicts that U.S. trade negotiations with Japan and the EU will be an “uphill battle.” Jim Bacchus, Distinguished University Professor of Global Affairs and Director of the Center for Global Economic and Environmental Opportunity at the University of Central Florida added that he is not impressed with the revisions President Trump has made to the NAFTA, nor with the manner in which he has “bullied [U.S.] trading partners into those revisions.” He clarified that any agreement is better than no agreement, but he feels that the USMCA constitutes “a move in the wrong direction,” that is, a move from freer trade to more managed trade. Similarly, he advocated for structural reforms to be addressed in U.S.-China trade negotiations with the objective of creating a freer trading relationship, rather than seeking only to reduce the bilateral goods deficit. Hills emphasized the benefits of multilateralism to the global trading system and insisted that, on issues where multilateral consensus cannot be reached, plurilateral arrangements such as NAFTA can be effective substitutes. Both panelists agreed that multilateral collaboration led by the world’s advanced economies will be necessary to effect WTO reforms and restore the functionality of the Appellate Body and dispute settlement mechanism. Watch the segment here. 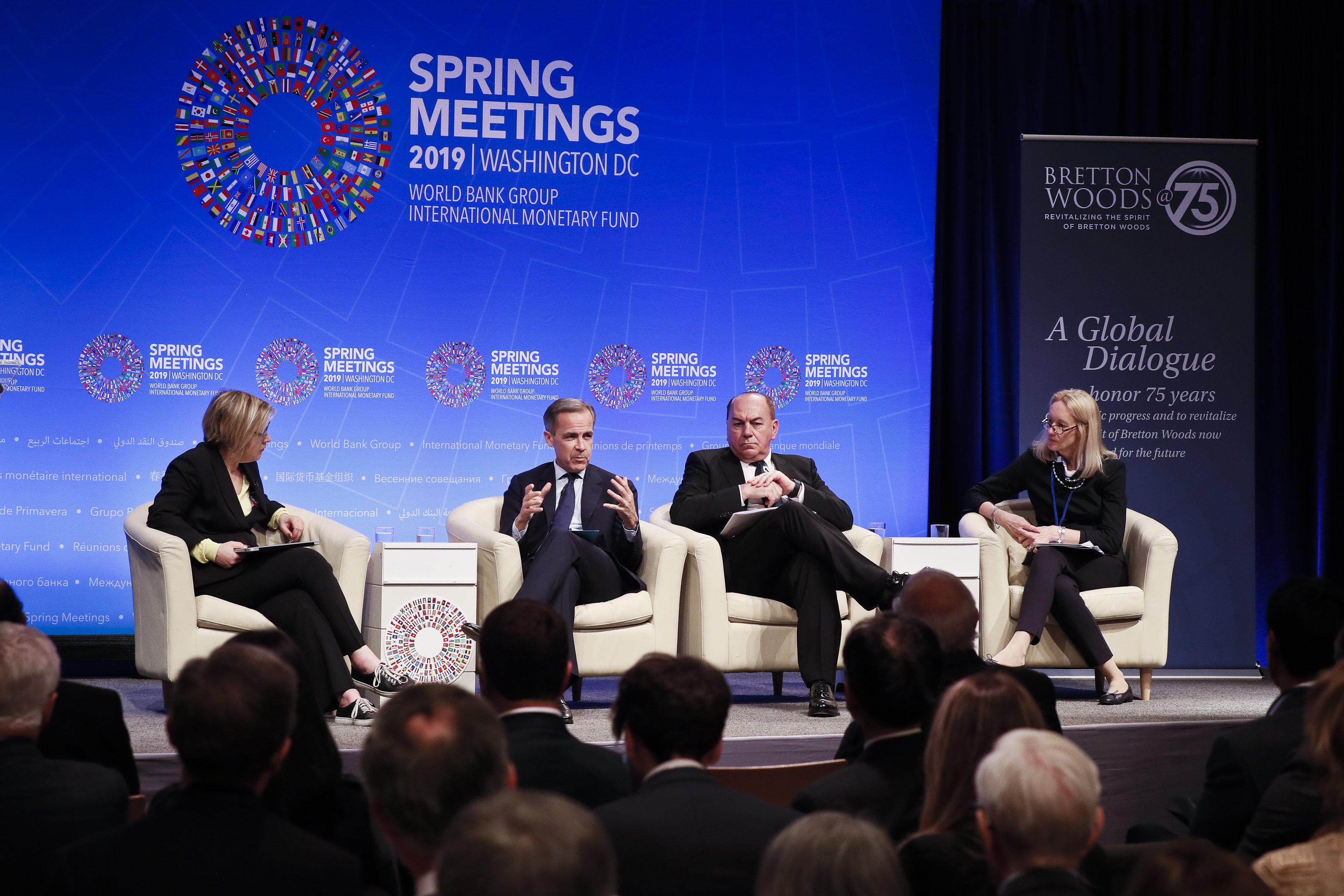 On a panel moderated by Financial Times US Managing Editor Gillian Tett, Bank of England Governor Mark Carney emphasized the importance of multilateral collaboration in reforming financial architecture into the future. He cited the establishment of the Financial Stability Board in the aftermath of the global financial crisis as an example of effective international cooperation. Going forward, he said, cooperation between the FSB, IMF, and central banks will be paramount as the reordering of the reserve currency system over the next few decades generates “issues too global to be resolved on a bilateral basis.” UBS Chairman Axel Weber concurred that the IMF was central to the post-crisis coordination mechanism, and that it is critical for the Fund, as a globally experienced institution, to play a central role in preventing future crises. However, Weber commented that coordinating regulators to ensure the stability of the global financial system is becoming increasingly difficult with the increased digitalization of the financial sector. Clare Woodman, Head of EMEA and CEO of Morgan Stanley & Co. International, agreed that digitalization is a major source of operational risk and indicated that Morgan Stanley has significantly increased its investment in cyber risk mitigation in response. She added that the landscape of globally important banks is, overall, taking a more forward-looking approach to risk management. Weber and Woodman agreed that, as a result of the reforms made since the crisis, there is much lower risk of financial contagion within the banking system than there was 10 years ago. Regarding the potential of a no-deal Brexit, all panelists agreed that, as Woodman put it, “planning for the worst but hoping for the best” is the best course of action to ensure that the financial system is prepared to absorb resulting market shocks. Watch the segment here. 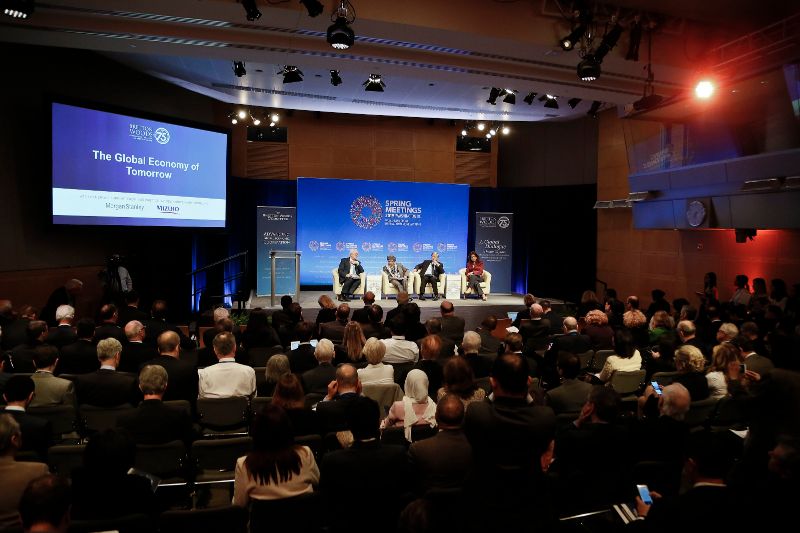 See the links below for press coverage of the Bretton Woods Committee 2019 Annual Meeting:

This year's Annual Meeting was part of our Bretton [email protected] initiative--  a global dialogue to honor 75 years of economic progress and to revitalize the spirit of Bretton Woods now and for the future.