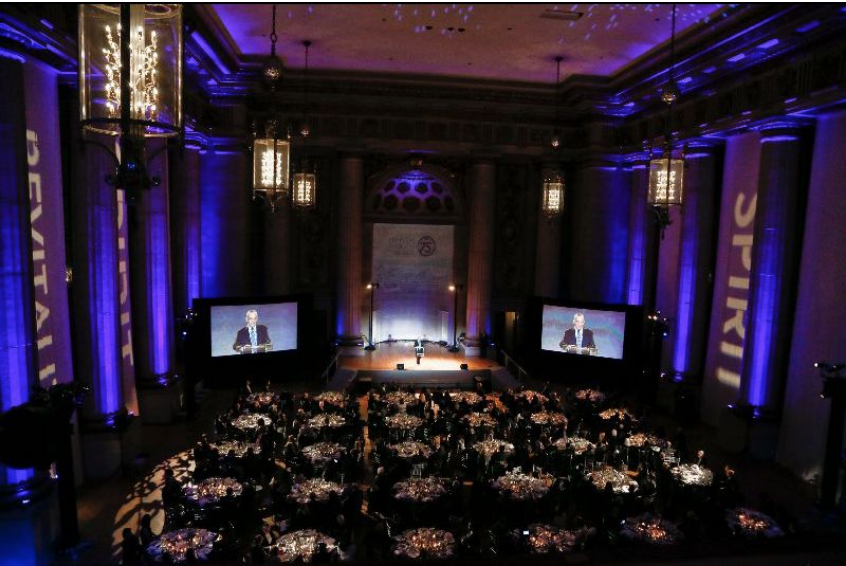 The Bretton Woods Committee would like to thank all our members, supporters, and friends who joined us on October 17 for the Bretton [email protected] Anniversary Gala Dinner. We hope you enjoyed yourselves as much as we did! The event celebrated the legacy of the Bretton Woods institutions, as well as today’s global leaders who champion international cooperation in an economically and politically uncertain time. It was a festive and inspirational evening at a classic Washington, DC venue – the perfect culmination to a successful year of thought leadership and interorganizational dialogue in support of multilateralism. We were honored to be joined by the heads of the Bretton Woods institutions, who each spoke to the evolution of the institutions over the past 75 years, as well as their optimism for the future.

If you missed it, here are some of the highlights: 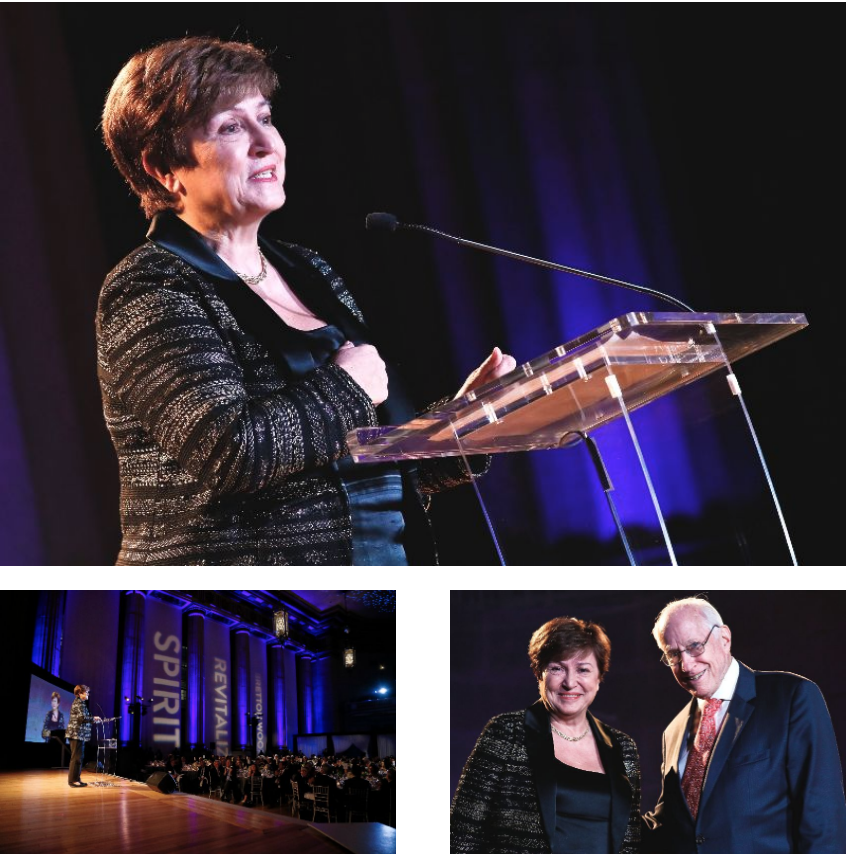 The first keynote address of the evening was given by Kristalina Georgieva, Managing Director of the IMF. She was introduced by Bretton Woods Committee Co-Chair Jim Kolbe, who spoke on behalf of the Committee in congratulating her on her recent confirmation and professing our full faith in her leadership of the institution. As the first national of an emerging market country to hold the office of Managing Director, Dr. Georgieva applauded the impact of the IMF in her native Bulgaria. She credited the IMF and World Bank with effecting a major economic transition toward competitive markets in post-Soviet economies; the economic vibrancy they helped foster is evidence of the success of the Bretton Woods model and the positive impact of international economic cooperation.

She acknowledged the evolution the Bretton Woods institutions have undergone over time to ensure their effectiveness in responding to the challenges facing the world today: climate change, terrorism, and technological innovation, among others. While the October World Economic Outlook published by the IMF forecast a slowdown in global growth in 2020, she emphasized that these conditions have generated greater appetite for international cooperation going forward and promised the continued vigilance of the Bretton Woods institutions as a “force for good” in addressing global challenges that cannot be effectively managed by individual countries.

In inviting World Bank President David Malpass to the stage, Bretton Woods Committee Advisory Council member William R. Rhodes cited several key challenges facing the World Bank today – alleviating unsustainable sovereign debt, increasing transparency and accountability in lending, and encouraging good governance reform in borrower countries – many of the forces of change highlighted by the Bretton [email protected] Compendium. President Malpass agreed that a key charge of the Bank is to ensure that development assistance reaches the people most in need of aid, which requires careful attention to the sustainable and effective disbursement of Bank funds. This mission is particularly urgent today, as many low-income countries are facing rising poverty levels in response to a slowdown in global growth and falling investment in emerging markets.

President Malpass expressed confidence in the ability of the international development community to call upon 75 years of experience to successfully identify the steps a country must take toward growth but insisted that it must continue to work to create institutional capacity domestically to implement them. To this end, the Bank is working closely with borrower countries to ensure that programs are tailored to fit the needs of beneficiaries. He also emphasized the importance of coordinating civil society organizations and development actors working on the ground to avoid programmatic duplication or contradiction, which was a key theme of Bretton [email protected]: encouraging multilateral collaboration for sustainable growth and development. 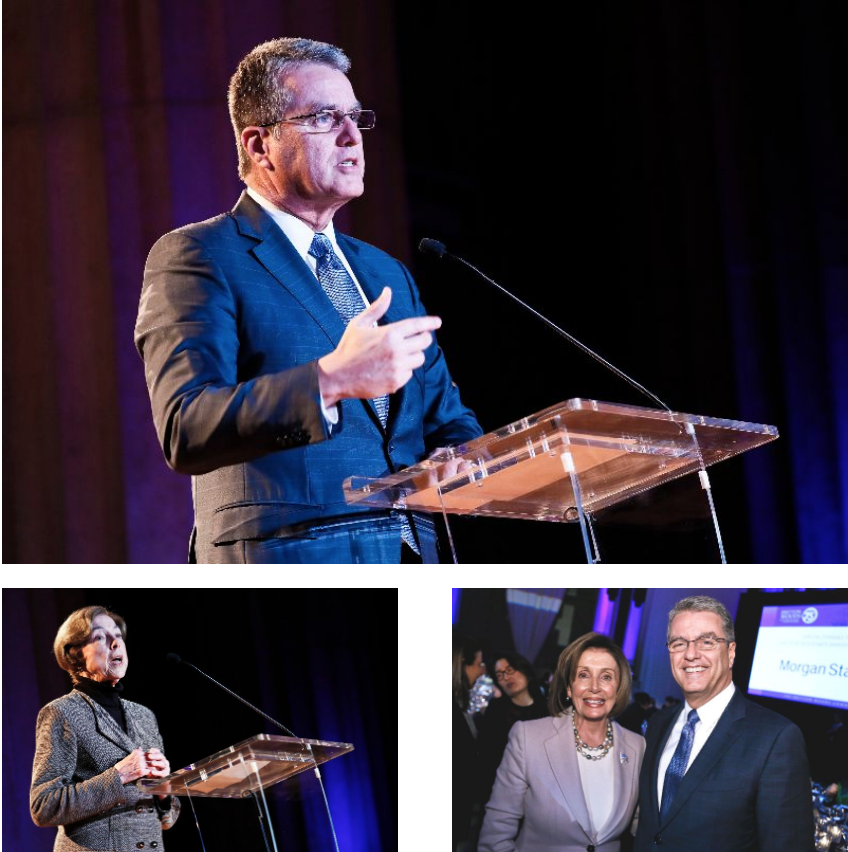 In her introductory remarks, Carla A. Hills, former U.S. Trade Representative, lamented that “open trade and negotiation are on the firing lines,” and applauded the strong leadership of our final keynote speaker, Roberto Azevêdo, Director-General of the WTO, in defending the rules-based trading system. “Today’s event is timely for reasons that go beyond a 75th birthday, not because the key lessons of Bretton Woods have changed, but because more than at any point in the past seven decades, we seem to be in danger of forgetting those lessons,” he stated. He emphasized that, while there has been a turn toward nationalist and isolationist sentiment in countries around the world, international cooperation and collaboration between the Bretton Woods institutions is in our “collective interest” and is critical to meeting the needs of global growth, sustainability, and development.

He reiterated that the WTO reform efforts currently underway will further increase the trade capacity of countries around the world while ensuring the institution can effectively respond to a changing international regulatory environment, technological advancement, and the increasing interconnectedness of the global economic system. He acknowledged fellow IFI leaders MD Georgieva and President Malpass as partners in a cross-institutional effort to promote multilateral collaboration on these challenges into the future.

Bretton Woods Committee Executive Director Randy Rodgers acknowledged the strength of the Committee membership for its unwavering dedication to the institutions since the Committee’s founding in 1983: “Our members perspectives are always their own, but when taken together, this Committee offers something truly unique: a collective, nonpartisan, and influential voice in support of global economic cooperation.” While many Committee leaders past and present joined us at the event, key among them was former World Bank President and longtime Bretton Woods Committee Co-Chair Jim Wolfensohn. We celebrated his retirement and presented him with a gift to honor his 10 years of service to the Committee.

As one influential Committee leader departed, we also welcomed a new member of the leadership team – former President of the Federal Reserve Bank of New York William C. Dudley. He spoke to the path forward for the international economic system in an uncertain time: “Although the Bretton Woods Conference took place a long time ago, what it set in motion is more relevant today than ever.” He commented on the strength of a global economic and financial system that has elevated millions of people from poverty, bolstered the trading capacity of emerging markets, and increased efficiency in the allocation of limited capital resources. Despite these demonstrable successes, he cautioned that the fragility of the system requires the harmonization of regulators and policymakers at the national and supranational levels. He closed by acknowledging the critical work of the Bretton Woods Committee in convening these institutional leaders and called on Committee membership to continue to work to preserve international cooperation into the future.

International Council Chair Richard A. Debs offered his congratulations to the Bretton Woods Committee membership on the success of the yearlong Bretton [email protected] initiative, which took place at a critical time: in the face of the mounting pressures of populism and isolationism that are shaking global support for the multilateral system, our community must continue to band together in defense of it. We are grateful to our membership for joining us in this effort over the past year, and we are thrilled that so many of you could join us in celebrating it! 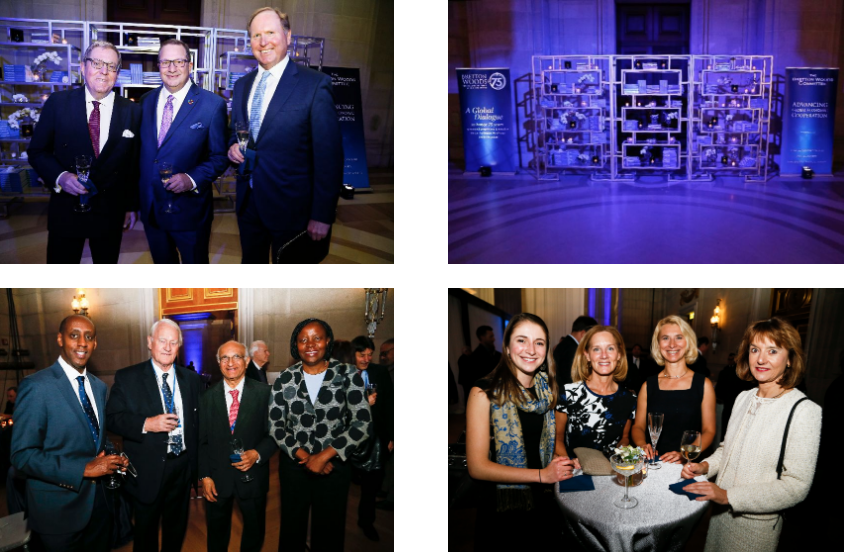 With Additional Support From