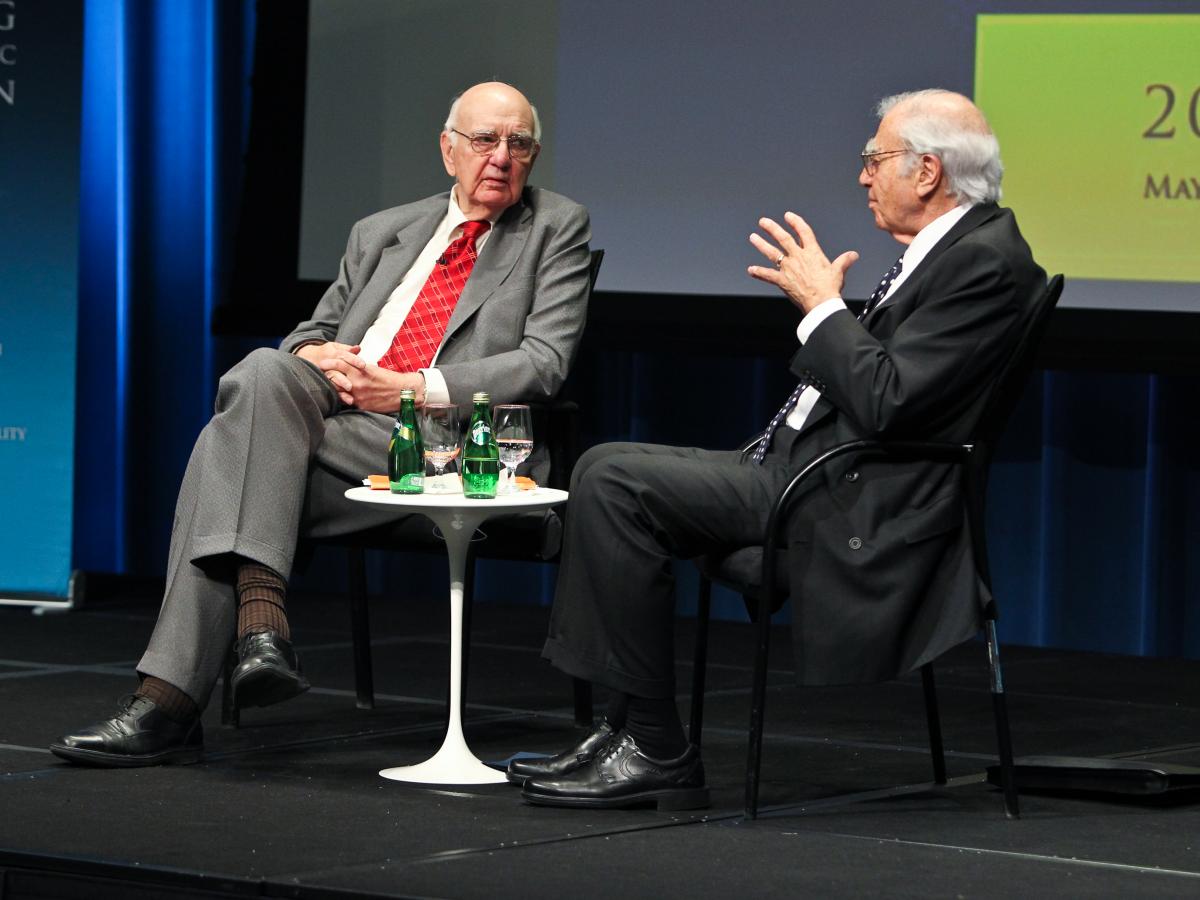 Body
Former Federal Reserve Chairman and former Bretton Woods Committee Chair Paul A. Volcker passed away Sunday in New York. He was 92. Mr. Volcker was an unwavering public servant who dedicated his career to serving his country. We were lucky to have his leadership for so many years at the Committee and will dearly miss him as a friend and as a true champion of multilateralism. As was his way, his last contribution to the Committee was quintessential Volcker - equal parts poignant, honest and inspiring.
The Spirit of Bretton Woods
Paul A. Volcker

To that extent, the spirit of Bretton Woods is alive—but not yet fully secure. The rise of new economic powers—first Japan, then China—and now the internal tensions within the eurozone—pose new challenges for cooperation. The political uncertainties within the United States itself could become the greatest threat.

That is why the Bretton Woods Committee remains relevant.

We won’t restore the fixed exchange rate system as it existed in the 1950s and 1960s—nor do we need to.

We won’t forever maintain a single national currency as the essential keystone of the system, nor should we want to.

We won’t provide the same volume of official development assistance—nor do we need to.

But we do need recognition of some basic elements of “good behavior” if the international financial and trading system is to flourish.

We do need to recognize that exchange rate practices are inherently multinational and that greater stability can be an international good.

We do need appreciation of the need for international standards with respect to technology and its multiplying uses.

We do need to avoid trade discrimination in services as well as goods.

We certainly need to recognize that corruption is not only a “cancer on development” but a bleeding scar on fair trade.

We certainly will need the leadership and ample financial resources for the Fund and the Bank when new international financial crises arise, as they surely will.

So let’s keep the spirit of Bretton Woods alive as we rethink the specific requirements of the new world. It is a world without the single national focus of leadership that we once took for granted. The growing challenge of “my country first and only” in a world in which the fortunes of all nations are irretrievably tied together needs to be recognized with a clear response.

That is to ask no more than the response to the challenge faced at Bretton Woods after the years of deconstruction of World War II. The risks are real—economic, political, military. They must be dealt with. Many more countries demand a seat at the table. Maybe a grand new conference to reach conclusions and enforce reform is beyond any present possibility. But surely a study and debate of new approaches is much in order. That is where the Bretton Woods Committee can help lead the way in new thinking for the 21st century.