The Future of the World Bank Under the Next President

On April 11, 2019, the Bretton Woods Committee co-hosted a panel with the Center for Global Development, The Future of the World Bank Under the Next President, which explored the most urgent issues in the development landscape and the role of the World Bank in addressing these challenges in the future. Featured speakers included Sri Mulyani Indrawati, Minister of Finance of Indonesia; Lawrence H. Summers, Charles W. Eliot University Professor at Harvard University; Minouche Shafik, Director of the London School of Economics and Political Science; Afsaneh Beschloss, Founder and CEO of the RockCreek Group; and Nicholas Stern, IG Patel Professor of Economics and Government at the London School of Economics and Political Science. The event was hosted by Masood Ahmed, President of the Center for Global Development, and William R. Rhodes, Advisory Council Member of the Bretton Woods Committee. Josh Zumbrun, a reporter for The Wall Street Journal, moderated the conversation. 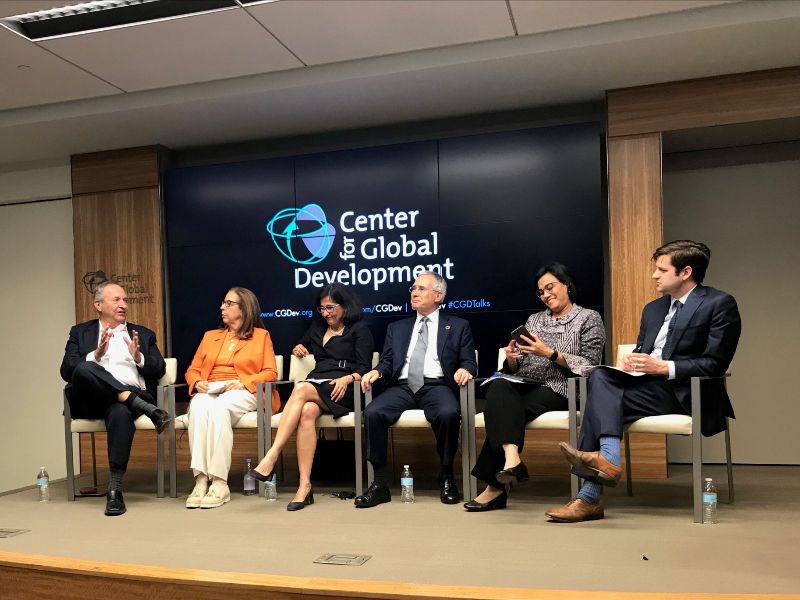 Mr. Rhodes opened the discussion by calling for Bank leadership to increase attention to institutional reform and governance in shareholder countries, lest Bank funds inadvertently “sanction corruption.” He challenged panelists in particular to outline how the Bank should respond to the Venezuelan refugee crisis, indicating that a joint effort is required on the part of international financial community and system of Bretton Woods institutions to effectively address the country’s humanitarian crisis, economic crisis, and governmental crisis. In response, Beschloss countered that the World Bank is better suited to implement long-term programs rather than responding quickly to humanitarian crises, suggesting that this is within the purview of international nonprofit organizations specialized for this purpose. Panelists, all of whom have previously served in leadership roles within the Bank, emphasized that the Bank should not stray from its mandate as a facilitator of poverty alleviation and should continue to align its objectives with the Sustainable Development Goals. They had the following advice for Mr. Malpass for guiding the Bank into the future: 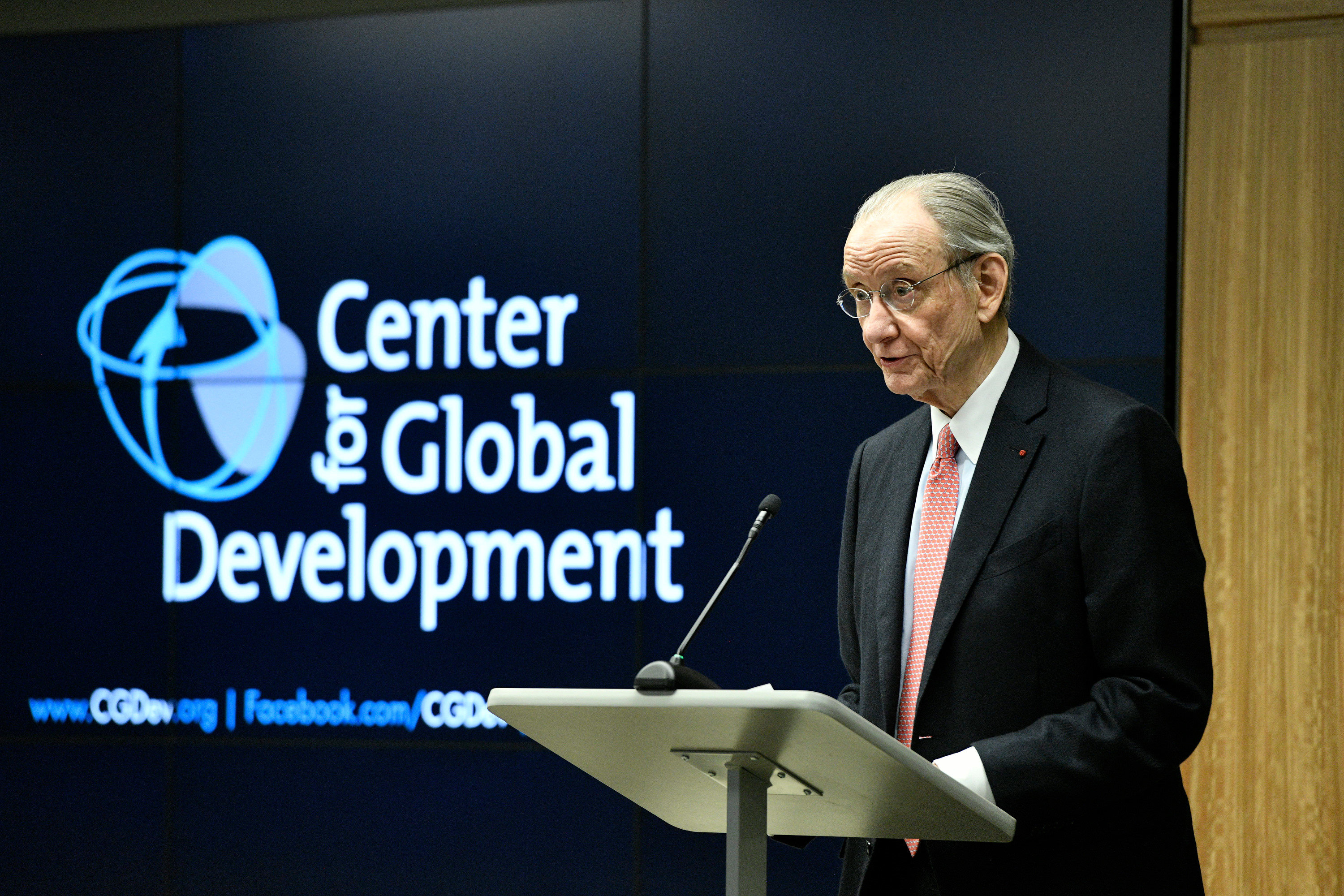 Establish Your Role: World Bank President or Arm of the U.S. Administration?

Panelists agreed that because he was nominated by an anti-international administration, Mr. Malpass’ priority as President must be to reassure the international community that he is devoted to the cause of multilateralism. There has been a crisis of leadership in the world’s international financial and development institutions, which has resulted in the fragmentation of the system. Shafik advised Malpass to take accountability for guiding the organization back to its central role within the international development landscape: “Don’t behave like an outsider and badmouth the organization internally and externally for the first year. You own it.” Because traditional Bank clients can now turn to regional development banks such as the Asian Infrastructure Investment Bank and Inter-American Development Bank, the World Bank must capitalize on its convening power to retain global support. Indrawati pointed out that because borrower countries have the benefit of choosing from among this growing landscape of lenders, the Bank must preserve its comparative advantage as a source of knowledge and global experience. Were the Bank to focus only on lending to low-income countries and fragile states, she said, it would constrain this accumulation of experience with countries that have implemented successful development programs and have less value to her as a client.

Seek Buy-In from Shareholders and Staff

Panelists emphasized the importance of initiating dialogue with shareholder countries, as well as regional multilateral development banks, to best understand the most urgent regional needs that should be incorporated into Bank country programs. This outreach, Beschloss noted, must be focused around engaging young people in strategy-making, which is necessary to ensure that the Bank harnesses the power of new technologies. Since the Bank President has significant leverage in shaping organizational programming, panelists emphasized that this will also require Mr. Malpass to reassert a commitment to the objectives already agreed upon by the global development community, the SDGs, rather than seeking to redefine the Bank’s mission or reorganize its structure. Summers added that it is crucial to foster mutually beneficial lending agreements, especially in light of an increasingly multipolar development banking system, by scaling back on stringent loan conditionalities that may drive away potential clients.

While panelists agreed that it is crucial for the Bank to advocate for poverty reduction and development progress in low-income countries and fragile states, there was disagreement about whether the Bank should lend to middle-income clients. Stern emphasized that World Bank lending is “not a zero-sum game,” and he and Indrawati agreed that support of all countries, regardless of their development progress, is necessary to bolster supply of global public goods such as investment for climate change mitigation and public health. Summers countered that the role of the World Bank and the objectives of its lending should be made more transparent considering the reality that, to a highly liquid middle-income country like China, a Bank loan does not constitute a financially meaningful sum relative to its total foreign reserve volume. He acknowledged that middle-income countries might choose to borrow from the Bank at a high interest rate because it bundles consulting services into the cost of borrowing, but posed the following question: “If the World Bank’s wisdom and advice...is valuable, then why isn’t China willing to pay the World Bank for it?” A debate ensued about the value of the services bundled with loans and whether the Bank is sufficiently transparent about the objectives of its loan programs and the costs incurred by its clients. Beschloss noted that, regardless, lending to middle-income countries is important to maintain the financial health of the Bank. The Bank can afford to make riskier, less profitable investments in low-income countries because of its high credit rating, bolstered by reliable returns from loans to more developed countries such as China. Ultimately, panelists reached an impasse about the ideal portfolio allocation between middle- and low-income countries but agreed that transparency surrounding the motivation for lending could be improved. 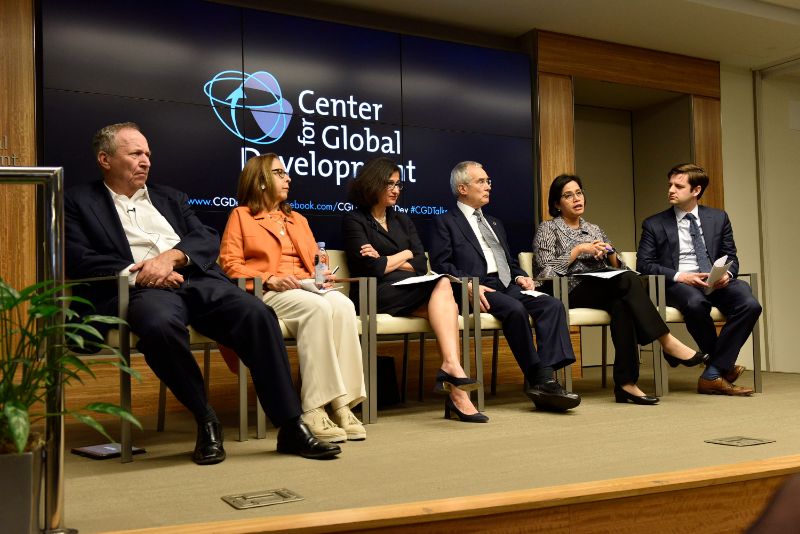 This event was part of our Bretton [email protected] initiative--  a global dialogue to honor 75 years of economic progress and to revitalize the spirit of Bretton Woods now and for the future.