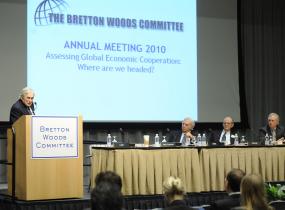 The 2010 Annual Meeting of the Bretton Woods Committee was held on February 26, 2010 at the World Bank Headquarters in Washington, DC. Attendees heard from the heads of the Bretton Woods Institutions and the Secretary-General of the OECD during the morning plenary, followed by a luncheon with a panel discussion.

Bill Frenzel, Co-Chair of the Committee, provided opening remarks for the meeting and introduced Pascal Lamy, Director General of the World Trade Organization.

Speaking via video conference, Director General Pascal Lamy spoke about the role of the WTO in global economic cooperation. The WTO constitutionally recognizes that trade must ensure growth, expansion, and quality of life. The main portfolio of the WTO consists of rule making, rule enforcing, capacity building, and research. In all four aspects, the WTO is interconnected with the rest of the system.

Rule Making includes issues relating to tariffs, subsidies, intellectual property rights, and government interference, among others. These are examples of explicit linkages that mandate international organizations.

Rule enforcement looks at creating a balance between private and public interest, and is playing an increasingly important role as the world exits the crisis.

Capacity Building has recently been expanded to include a program specific to targeting the development process that would concentrate the efforts of the World Bank, WHO, IMF, and WTO in developing countries.

Research projects by the WTO are cross organizational by nature and will continue to build relationships and partnerships with other Bretton Woods and multilateral institutions.

Following a Q&A session with Lamy, the Committee's newest Co-Chair, Jim Wolfensohn, introduced World Bank President, Robert Zoellick, to the podium to speak about the role of the World Bank during the global recovery and how to modernize multilateralism.

World Bank President Robert Zoellick noted that though a double-dip global recession looks increasingly unlikely in the future, there are still potential problems that everyone should be aware of when moving forward out of the crisis. There is still a sense of uncertainly and no forward market for positive expectations, and the re-pricing of foreign credit risk and running through credit market liquidity is one such area that must not crowd out the private sector.

Interestingly, this has also changed the future of business response and investment, as it becomes clear that developing countries are leading the recovery. Cross border exchanges used to be limited to North-South partnerships, but now South-South partnerships have increased in frequency, and even South-North connections are emerging. These developments have encouraged key players to go where the capital is. After the crisis, it was made clear that there is no risk-free zone. Investors have now turned to tapping the potential in developing countries.

In addition to its work with the global recovery, the World Bank has moved to rectify criticisms of the limited transparency to its work by improving access to information in a manner similar to the United States' Freedom of Information Act. The traditional lending schema used to be an investment loan but did not monitor the loans very carefully, nor was risk thoroughly calculated. The World Bank has used its matrix of knowledge and learning in specific regions, but not yet across regions. Sharing information and knowledge is very important in networking and spreading responsibility. The Bank must also be flexible with its short term contracts, and open to change based on opportunity. 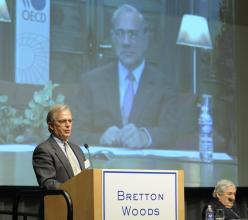 Managing Director Dominique Strauss-Kahn explained that the Fund has adopted an overarching aim of promoting economic stability and supporting peace and progress. At present, the bulk of the Fund's efforts are devoted at country level, so the IMF needs clearer mandates and new ideas for procedures for a world ready for a more systemic vision. The new approach developed at the G20 Spring Meeting is contingent on successful and routine multilateral surveillance that would encompass the already existing bilateral framework and that would work to greatly improve surveillance in major countries.

In looking at the response to the crisis, it is important to note that some key emerging market economies turn to their Fed, thus indicating a willingness of liquidity support. The IMF's role would be relegated as a stopgap measure with the revamped lending framework to low income countries. The Fund would do as the G20 asked with a 0% rate lending and a reevaluation in 2012. It would provide low income countries insurance against climate change, security issues and so forth; potentially becoming a very strong stabilizing force guarding against shocks.

The crisis response and monitoring has yet to address governance reform, and in this aspect the Fund must make progress. This can be done by shifting economic reality to match those of emerging countries and improving legitimacy within these countries on a symbolic level.

Jim Orr, Executive Director of the Committee, introduced Secretary-General of the OECD, Angel Gurría, as the final speaker of the morning plenary. The Secretary-General spoke about the OECD as a hub for global issues and best policy practices.

Via video conferencing, Secretary-General Angel Gurría explained how the OECD facilitates the exchange of expertise in public policy and is an example of the shape that international cooperation may take to help governments to solve their own problems. Local and global agendas reinforce each other in helping to promote best practices, and the OECD extracts the analysis behind these discussions and converts them into policy recommendations in an effort to influence policy agenda.

Recently, OECD has been reaching out in its efforts to be more inclusive with the additions of Chile, Russia, and Israel to its member ranks. It has also created a new category for emerging markets that may be ready to join member ranks in the near future. As part of its new efforts, the OECD delivered its own economic review and even questioned the quality of practices that are currently working. It has also been developing regional programs in the Middle East, Latin America, and South Asia with the intent of facilitating mutual learning.

In the future, there needs to be an increase in global policy coherence, and the Secretary General encouraged the cross pollination of the World Bank, World Trade Organization, the IMF and others to improve cooperation. We should not increase in new bureaucracy, but rather should focus on strengthening current relations.

Following the morning plenary, Annual Meeting participants sat down to lunch and listened to a panel discussion about managing the dangerous imbalances in the global economy.  Jim Orr moderated the panel.

Angelos Pangratis, Chargé d'Affaires a.i. / Acting Head of Delegation, Delegation of the European Union to the US gave a European perspective to the panel. He defined European Union principles drawn from the crisis as: Withdrawal must wait, fiscal sustainability and sustainable recovery are of paramount importance, and different situations and circumstances require differentiated methods of exit.

The uniqueness of the EU comes from its balance between acting as a state without assuming the full responsibility of replacing a national government. In addition, the EU approach has defined only the process and not the destination based on evaluation, reaction, and response. Thus, the EU is able to avoid major crises and consolidate gains. Of most importance is the fundamental idea of responding to any difficult situation with solidarity and balance.

Matthew Bishop, New York Bureau Chief, American Business Editor for The Economist, put his British heritage aside and followed up Mr. Pangratis' speech with a US perspective on the economy. He said that multilateral leadership marks the beginnings of a new world order. Current conditions do not only constitute an economic crisis, and a coordinated global response will go undone without American leadership. The United States also needs to participate in the debate about China's increasing importance in the global arena or it may face similar consequences to Britain whose error of following failing policy led to a shift in the global balance of power.

Jim Wolfensohn, Co-Chair of the Committee, provided an African point of view. OECD countries constitute 80 to 85% of global GDP. The continent of Africa with its 53 countries creates, by liberal estimates, around 1.5%. This means at the end of the last century, 900 million people were living with less than 2% of overall global GDP. However, with the rising influence of India and China, the dominance of the OECD nations is predicted to drop. It is with this future in mind that we must consider future plans. In times of economic hardship, it is particularly difficult to rouse interest in helping African countries gain a foothold in global GDP. Even among African leaders it is difficult to breed African unity. As we move into the future, it is important to bring with us into the modern era the two billion people that would otherwise be left behind.

You may view a more detailed summary here.

The Bretton Woods Committee would like to thank its Strategic Partner,

National Bank of Kuwait (NBK), for its help in making this meeting possible.

Bretton Woods in the News: