Turmoil in Europe - A Wider Threat?

Turmoil in Europe – A Wider Threat? from The Bretton Woods Committee on Vimeo.

Current Situation and Spillover Risks. The speakers agreed that spillover risks within Europe as well as from Europe to other parts of the world remain a significant potential concern. Chopra cautioned that tensions could spread from the periphery to the core European economies due to the linkages between banking and sovereign risks despite the periphery's small contribution to Eurozone GDP and trade. The closest geographic neighbors of the Eurozone are most at-risk for spillovers, he explained. This means the risks were much smaller for the United States than for countries such as the United Kingdom. Chopra highlighted that any spillover to the U.S. of the current tensions would likely emerge through the financial sector, in light of trade with the Eurozone representing only about 2% of U.S. GDP. Kleiman shared this view, noting that the Middle East and North Africa were already experiencing spillovers due to their dependence on European banking networks. Reinhart instead focused on common underlying fundamental problems among advanced countries. The main issue from her perspective is not spillovers from Europe to the United States, but rather advanced economies having the same fundamental challenges of high levels of public debt, including contingent liabilities. 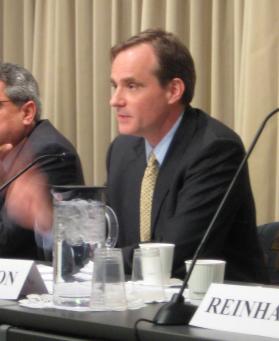 Reinhart and Johnson also emphasized the issue of contingent liabilities for European countries as being a significant one - as sovereigns take on the risk from private banks, some of which are larger than national economies themselves. Johnson noted that there is no way to account for the potential impact of these liabilities, and that banks can become too-big-to-save because the potential damage from them can be so great that it results in fiscal ruin, such as in the case of Ireland. Reinhart added that advanced economies have not had these broadly-defined levels of debt since World War II, meaning even small shocks would have significant impacts as countries are so highly leveraged.

Response and Recommended Next Steps. While shocks to the Eurozone periphery have so far been contained, the discussants acknowledged that more comprehensive and decisive actions will be needed to stem any spillover risks. Chopra, arguing from an IMF perspective, noted that thanks to the willingness of national and international authorities to respond effectively the spread of tensions has been minimized. Nevertheless, he acknowledged that while the European authorities are taking appropriate action it may not be within the timeline that others hope to see. Chopra explained the IMF view that more credible and stringent bank stress tests need to be conducted followed by time-bound plans for recapitalization or resolution of unviable institutions. The IMF was of also of the opinion that the European Central Bank should continue to provide liquidity and stability through securities purchases. Chopra also said that European Stability Mechanism will need to be further clarified and strengthened to allow for rapid deployment of resources. Finally, he mentioned a robust Eurozone-wide crisis resolution framework needs to be developed to create consistent policy responses. 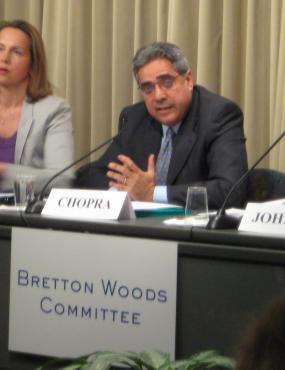 Other panelists argued that the IMF must go further. Johnson focused on calling for the strengthening of fiscal rules and capital requirements, and noted that the European 'competitiveness pact' is a step in the right direction. He asserted that current government debt limits in Europe are too high and have no economic basis. He recommended that countries should look to the Baltics as an example, where 10-20% of GDP is the limit for sovereign debt and taxes are used to finance government programs. The Basel III capital requirement increases, he felt, did not go far enough. He stressed that capital requirements are a central issue that should not be left to regulators and central banks. Johnson thus argued that a substantial increase in capital requirements is required from a macro-prudential standpoint, and that the IMF needs to take a stronger stance to call for significantly higher capital requirements for banks. Raising capital requirements would not damage growth prospects in his view. Rather, he emphasized the risk of undercapitalized banks not making loans, which in turn will slow growth.

Reinhart praised the IMF for acting swiftly and pragmatically but called for a stronger focus on restructuring debt in order to create a more sustainable long-term environment. Reinhart and Kleiman drew attention to the policy need to address debt restructuring sooner rather than later. Reinhart highlighted the possibility of learning from history, in particular the experience governments had in managing their post-World War II debt. This would include managing debt through locking in long-term securities, creating captive domestic markets such as pension funds to keep financing costs low, and allowing for gradual inflation. Kleiman explained that emerging market parallels that might serve as potential models for debt restructuring, such as the cases of Jamaica and Kazakhstan. Kleiman highlighted that in Jamaica, all government debt maturities were extended, while in Kazakhstan, the government nationalized banks and imposed severe write-downs of principal and interest on all investors. He suggested that a European restructuring might fall somewhere between these examples, but stressed that it must be a pre-emptive move rather than post-default.