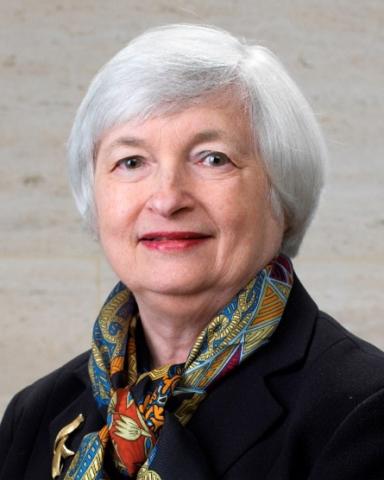 Dr. Yellen is Professor Emerita at the University of California at Berkeley where she was the Eugene E. and Catherine M. Trefethen Professor of Business and Professor of Economics (1999-2006) and has been a faculty member since 1980.  Prior to Berkeley, she was assistant professor of economics at Harvard University (1971-1976), an economist at the Federal Reserve Board (1977-1978), and a lecturer at the London School of Economics (1978-1988).

In 2012, Dr. Yellen was appointed Distinguished Fellow of the American Economic Association, for which she served as a Vice President (2004-2005), and where she is currently President. Dr. Yellen is a member of the American Academy of Arts and Sciences, the Council on Foreign Relations, the Economic Strategy Group of the Aspen Institute, the Group of Thirty, and the Climate Leadership Council (for which she was a founding member). She serves on the advisory boards of the Bloomberg New Economic Forum, the Committee for a Responsible Federal Budget and Fix the Debt Coalition (CRFB), and the Washington Center for Equitable Growth Steering Committee.  She was elected to the Yale Corporation as an alumni fellow in 2000, serving until 2006.

Her scholarship has covered a range of macroeconomic issues, with a special focus on the causes, mechanisms, and implications of unemployment.  She has authored numerous articles, as well as The Fabulous Decade: Macroeconomic Lessons from the 1990s, with Alan Blinder (Century Foundation Press, 2001).