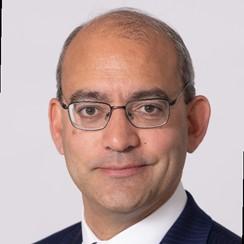 Krishna Guha is Vice Chairman of Evercore ISI and heads the Global Policy and Central Bank Strategy team based in Washington, D.C. In the 2019 Institutional Investor All-America Research Team, Evercore ISI’s Policy team was ranked #1 and Mr. Guha was ranked #1 as an individual.

Before joining the New York Fed, Mr. Guha was a senior writer on global economics and economic policy at the Financial Times, where he held a series of senior positions including US Economics Editor, Lex columnist and Editorial Leader Writer (member of the Editorial Board). He was awarded the Best in Business award by the Society of American Business Editors and Writers and the Excellence in Financial Journalism award by the New York State Society of Certified Public Accountants for his work on the financial crisis.

Mr. Guha was educated at Sidney Sussex College, Cambridge University, and the Kennedy School of Government at Harvard, where he was a Fulbright Scholar and won the C.V. Starr award.