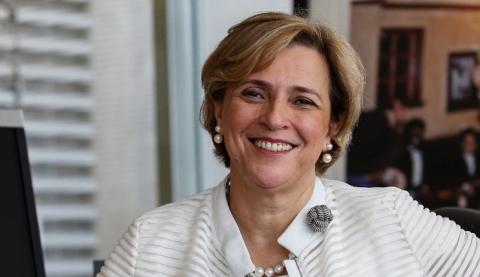 Maria Ramos is a corporate leader and banker who was elected Chairman of AngloGold Ashanti in December 2020 having previously served on its board.  She was appointed to the board of Standard Chartered PLC as an independent non-executive director in January 2021.  She also serves as independent non-executive director on the board of Compagnie Financière Richemont SA.  She served on the boards of the Public Investment Corporation (PIC) and Saudi British Bank (SABB) until December 2020.

Between March 2009 and February 2019, Ms. Ramos served as Chief Executive Officer of Absa Group leading the Group through a number of significant milestones including the acquisition of the Barclays Africa subsidiary banks; the sell-down by Barclays PLC and the setting a new strategy and refreshed brand for the bank.

Before joining Absa (previously Barclays Africa Group Limited) as Group Chief Executive in March 2009, Ms. Ramos served as the Chief Executive of Transnet Limited for five years. This followed an eight-year tenure as director general of South Africa’s National Treasury (formerly the Department of Finance) during which time she played a crucial role in transforming the Treasury into one of the most effective and efficient state departments in the post-apartheid administration.

An accomplished academic, who has taught at various institutions, Maria obtained an Institute of Bankers’ Diploma (CAIB) in 1983. She followed this with a Bachelor of Commerce from the University of the Witwatersrand (Wits) in 1986, a Bachelor of Commerce Honours in Economics (Wits) in 1987 and a Master of Science (Economics) from the University of London (SOAS) in 1992.  She is also a recipient of honorary doctorates from the Stellenbosch and Free State universities.

Ms. Ramos has in the past served as a non-executive and independent director on the boards of Sanlam Ltd, Remgro Ltd and SABMiller PLC.  She was a member of the WEF’s International Business Council and member of its executive Committee for 12 years and its chairman between 2017 and 2019.

She is a member of the Group of Thirty.  She also Co-chaired the United Nations Secretary General’s Task Force on Digital Financing of the Sustainable Development Goals from October 2018 to August 2020 when the Final Report was launched.  She serves on the International Advisory Board of the Blavatnik School of Government, Oxford University.   She also serves on the Bretton Woods Committee Advisory Council.  She is a member of the IWFSA.