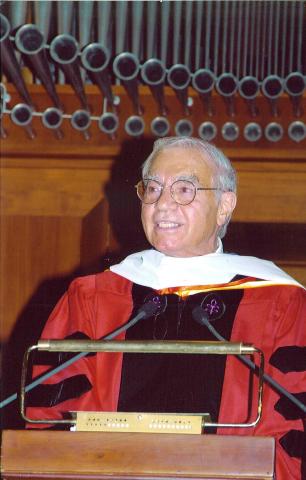 Richard A. Debs, a founding member of the Bretton Woods Committee, is an Advisory Director of Morgan Stanley, having joined the firm in 1976 as the founding President of Morgan Stanley International to develop the bank’s international business.  Previously, he was the Chief Operating Officer of the Federal Reserve Bank of New York, where he also served as an Alternate Member of the Federal Open Market Committee, and as Chairman of the Federal Reserve – Treasury Committee on Fiscal Agency Operations.  He also served as an Advisor on the United States delegations to the IMF and World Bank annual meetings.  He was the Fed’s principal contact with the OPEC countries during the petrodollar crisis of the 70’s.  During his transition from the Fed to Morgan Stanley, he served as a pro-bono financial advisor to President Sadat of Egypt.  He has served as Chairman of Carnegie Hall, the American University of Beirut, the New York Stock Exchange International Committee, and the U.S.-Saudi Business Council; as a trustee of the Carnegie Endowment for International Peace, the Institute of International Education, the Federation of Protestant Welfare Agencies; and as a member of the Group of Thirty.  He has been awarded decorations from Saudi Arabia and Lebanon.  A Summa Cum Laude graduate of Colgate University, he holds an M.A. and Ph.D. from Princeton University, where he was a Ford Foundation Fellow.   He is also a graduate of the Harvard Law School and the Advanced Management Program of the Harvard Business School. Awarded a joint fellowship from Princeton and Harvard, he conducted research in the Middle East and subsequently wrote a book on “Islamic Law and Civil Code” published by Columbia University Press and American University of Cairo Press. He is married to Dr. Barbara Knowles Debs, former President of Manhattanville College and of The New-York Historical Society.