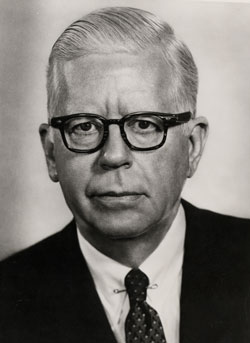 Henry H. Fowler was Secretary of the Treasury under President Lyndon Johnson (1965-1968). He also served as Under Secretary of the Treasury (1961 -1964), an assistant general counsel of the Office of Production Management and War Production Board (1941-1944), and Director of the Office of Defense Mobilization and member of the National Security Council during the Korean War.