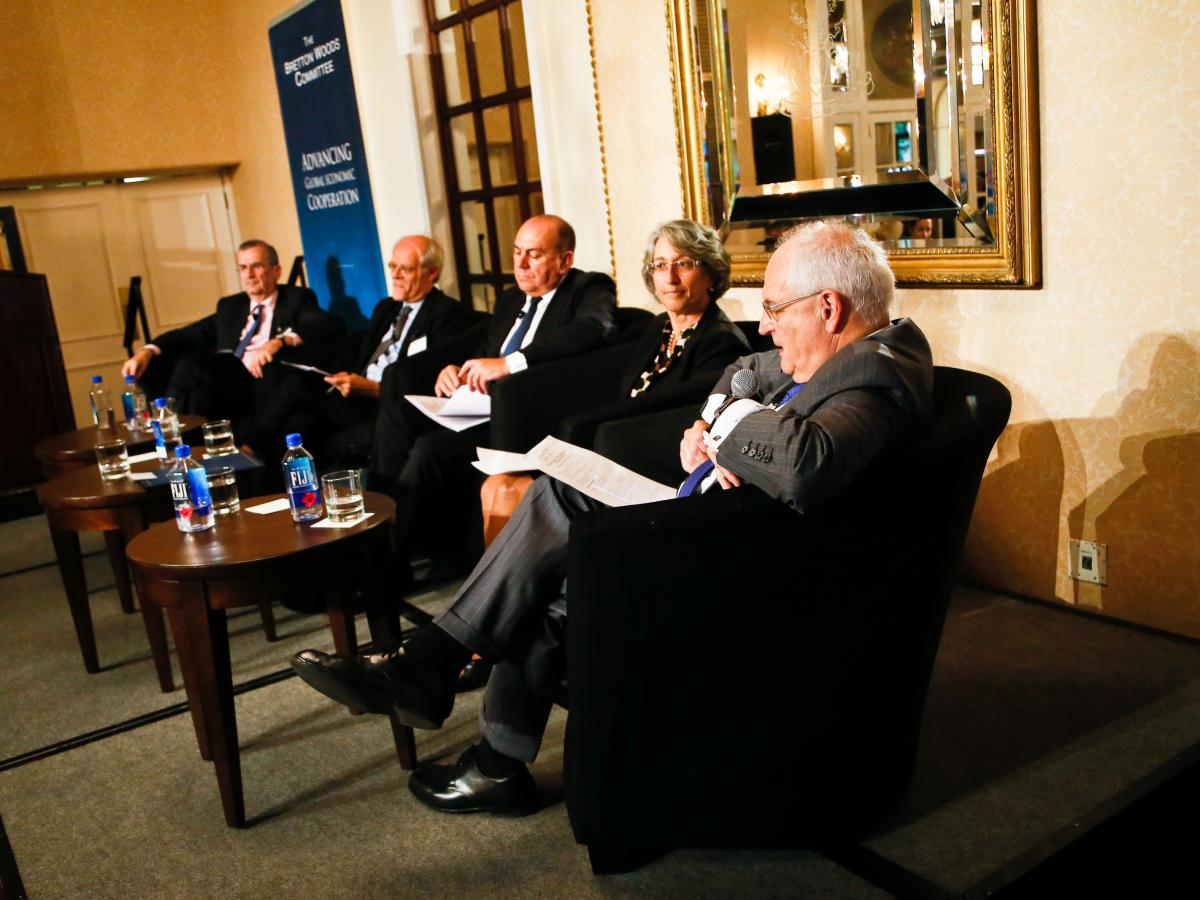 NEED FOR INTERNATIONAL ECONOMIC COOPERATION: The moderators of the program detailed the challenges facing the global economy, underscoring the international problems that will require international solutions. Setting the scene, Committee Co-Chair James D. Wolfensohn highlighted shifting positions of the top 30 global economic powers and demographic challenges facing both advanced and emerging economies. Committee Advisory Council member William R. Rhodes emphasized the rise of populism in Western democracies, instability on the Korean peninsula, Brexit and NAFTA negotiations, and the 19th Chinese Party Congress. While Financial Times Chief Economic Commentator Martin Wolf asked if the global financial system and regulatory architecture would be able to handle the next financial crisis in a coherent, constructive, and collective manner. Against this shifting economic, financial and geopolitical backdrop, the day’s conversation decisively called for greater international economic cooperation to address current and future economic challenges.

YES, BUT: The overwhelming sentiment of the day was guarded optimism as Mohamed El-Erian coined the “Yes, but” theme. Yes, increased global growth, the synchronicity of that growth, and the volatility of the financial environment have improved in the past year, but economists and policymakers understand less about the fundamental economic relationships in advanced economies than before, he claimed. International Monetary Fund Economic Counsellor Maurice Obstfeld also expressed optimism about the global economic outlook, but warned against complacency, explaining that policy uncertainty, low commodity prices, stagnant wage growth, and a possible rise in interest rates pose longer-term risks. Governor of Sveriges Riksbank and Basel Committee Chairman Stefan Ingves expounded on the progress of the Basel III banking reforms, but conveyed that risk-weighted assessments and output floors continue to be a barrier to finalization of the agreement.

TIME FOR ACTION: Experts agreed that given the economic upswing, now is the time to make policy changes that address the long-term risks. Banque de France Governor Francois Villeroy de Galhau urged, “We have a window of opportunity to strengthen national reforms.” The international community, he said, must use this time to achieve three goals: 1) preserve what we’ve already achieved, 2) rebalance economic policies, and 3) complete financial regulation. World Bank Managing Director and Chief Financial Officer Joaquim Levy underscored the need to prepare now for climate shocks, technological disruptions in the labor force, and future demographic pressures, insisting, “We need to take the opportunity when the economy is doing better to address key issues in terms of development strategies of countries.”

FINTECH OR TECHFIN: A significant theme for the day focused on the growing role of technology in the financial services industry. Speakers highlighted the potential for fintech to transform traditional business models and disrupt industries. Axel Weber, Group Chairman of UBS AG, asserted that the rise of “Techfins,” or large technology companies that offer financial services, requires banks to transform themselves into platforms. Barclays Chairman John McFarlane imagined that banks will have to evolve into “technology companies that do a bit of banking, rather than banks that use a bit of technology.” On regulating fintech, Deputy Secretary of the Ministry of Finance and Public Credit of Mexico Vanessa Rubio-Marquez emphasized, “Technology is a huge challenge for regulators. Some fintech companies have totally new elements.”

NOT WHAT YOU DO, BUT WHY YOU DO IT: The importance of corporate governance and culture to building trust in the financial sector and maintaining global financial stability remained a salient theme. Gail Kelly, former Chief Exeutive Officer and Managing Director of Westpac Banking Corporation, articulated bank leadership starts with defining the bank’s purpose, saying firms must identify “not just what they do, and how they do it, but why they do it.” BlackRock Vice Chairman Barbara Novick and Weber agreed that essential to good governance is creating incentive structures that reward non-risky behavior.

TRADE IS STRONG, DESPITE THE POLITICS: Speakers reiterated throughout the day that the appetite for multilateral trade is not gone, even in the midst of global populist movements. In Asia, “the notion of multilateral agreements is alive and well,” Kelly contended. Rubio-Marquez reported Mexico’s trade relationships are strong and the country is looking to accelerate trade diversification through deepening partnerships with the Pacific Alliance, TPP-11, and possibly Mercosur in South America. Even on the tough issue of Brexit negotiations, McFarlane informed the panel that progress, while not complete, has been made and he remains “relatively confident that it is in the interest of the E.U. and London to avoid dislocation and reach some sensible outcome.”

Segment 1 - Outlook and Opportunities for an Integrated Global Economy

Segment 2 - The Future of Global Economic Growth and Cooperation