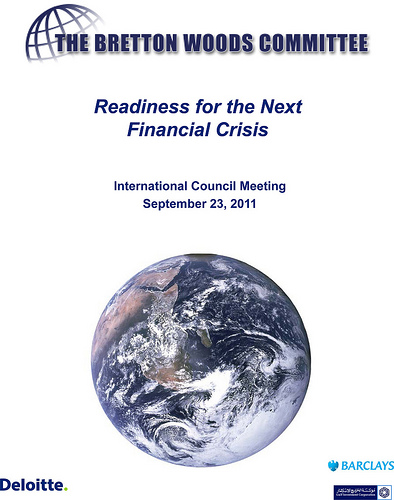 In a speech entitled ‘The Way Forward: Finding the Will to Take Meaningful Action’, IMF Managing Director Christine Lagarde began the day by stressing the importance of accepting the hopeful good news that economies are growing after the 2009 decline, even though there is a downside risk in growth being low and apparently slowing from where it was in 2010. She acknowledged that emerging economies are showing better growth and resilience, but intimated they would not be immune to the economic volatility that persists. "There is very strong interconnectedness," said Lagarde. "And whereas in the past some of the crises could be limited to two, three, or a small group of countries, or limited to a part of the world, that is no longer the case," she warned. 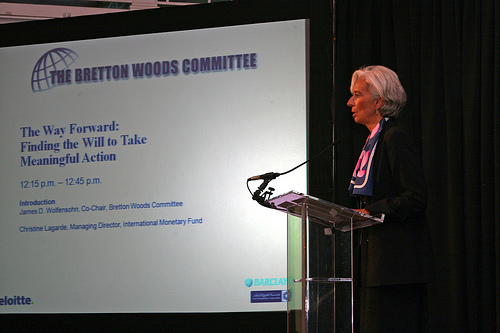 Lagarde indicated that Repair, Reform, Rebalance and Rebuild – four “R’s” – were all critically important to achieving a global recovery. First, repair of the sovereign debt overhang is imperative. Fiscal consolidation in the medium and long term, without a one size fits all approach, is necessary for assurance on fundamentals and to avoid suffocating growth or economic and social benefits. Healing of the banking system, by building strong enough balance sheets to withstand crises, is also critical to financial stability. Second, in many areas reform has progressed significantly although the journey has just begun and it is a tedious process. More inclusive reform is needed to improve financial sector supervision and to address the social implications of the economic crisis. “Growth with jobs, in and of itself, is not sufficient,” Lagarde noted, as value and wealth must be created to calm the streets and fields, especially for the young. Third, a rebalance across numerous fronts, including the public vs. private sector growth engine, and among current account deficit and surplus countries, is important for consumption and is taking place slowly. Finally, rebuild, particularly within the communities of low income and emerging market economies, is essential to sustain the crisis recovery moving forward. Lagarde also stressed that a revival of global cooperation is essential – perhaps in the ‘spirit’ of Bretton Woods, to overcome the temptation of national or regional approaches and rejuvenate efforts to find global solutions to today’s challenges.

William Dudley, Chief Executive Officer of The Federal Reserve Bank of New York, spoke extensively on Financial Stability and Economic Growth. Dudley premised his comments on his observations that: a stable financial system is a prerequisite for sustainable economic growth; the financial system that operated in the years leading up to the crisis failed to produce economic growth and employment; and essential services to savers and borrowers have fallen short. Now, with the debt build-up and the anemic economic recovery, there is a need for a resilient financial system, with reforms necessary for financial stability, though costly and difficult.

He acknowledged that financial markets are inherently unstable, prone to natural booms and busts, and indicated regulators must work toward restraining financial booms in order to temper the busts. Dudley urged regulators to keep pushing the reform agenda forward, even in the face of opposition. "Experience suggests that it is not easy for market participants to agree on measures that enhance financial stability when this goal conflicts with the commercial and business interests,” he remarked. “If the private sector falls short in this instance, public authorities may need to intervene and impose more forceful regulatory solutions.” He concluded that reforms are progressing – though unevenly – and need to become threads for reforms internationally, with sensitivity to burdens imposed on smaller players.

The next segment on Harmonizing Macro and Micro Prudential Supervision included perspectives by Lord Turner, Chairman of the UK’s Financial Services Authority; Stefan Ingves, Governor of Sveriges Riksbank and Chairman of the Basel Committee on Banking Supervision; and Martin Gruenberg, Acting Chairman of the Federal Deposit Insurance Corporation. Lord Turner evaluated progress across both macro and micro prudential supervision efforts, and stressed that on the micro side improvement was needed in assessing trading capital (such as value-at-risk, or VAR systems), and in identifying and managing the risks of the shadow banking industry. Macro side progress has been made in creating new institutions but tools and analyses are vital to better measure the credit cycle and its inherent risks. “We’ve made progress creating institutions and furthering the debate for tools to manage macro prudential issues, but less progress on taking specific action in this area,” Turner mused.

Governor Ingves stressed the need for a better government structure for macro prudential supervision. He reviewed the work and focus of the Basel Committee on Banking Supervision, and intimated that the next stage of work takes the organization into new territory, and includes a global assessment process to ensure “binding” standards and measures are properly implemented.

Chairman Gruenberg described the important advances made through the U.S. reform, which center on systemic stability, including cross system risk assessments, a Council with prudential responsibility for non-banks, and recovery and resolution plans. He used the Lehman experience, through bankruptcy, to illustrate the Dodd frank Act improvements. To meet legislative mandates and address the too-big-too-fail complexities of global systemically important financial institutions (SIFIs), the FDIC has stood up its Office of Complex Financial Institutions (OCFI) and is strengthening its operational readiness to manage SIFI resolutions. The “living wills”, now being developed externally by SIFIs, will serve to inform internal OCFI resolution planning being articulated through FDIC and Federal Reserve rulemaking, with the next step being to further both direct and multi-lateral cross-border coordination - to foster FDIC’s orderly liquidation of SIFIs requiring resolution. 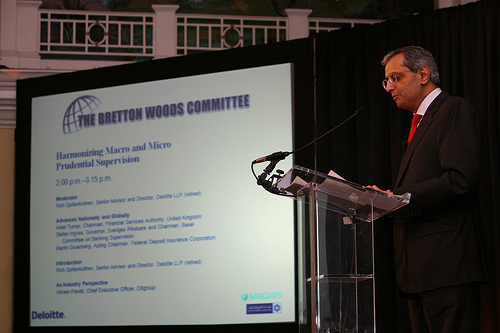 Vikram Pandit, Citigroup Chief Executive Officer, offered An Industry Perspective on the state of national and global regulatory harmonization efforts, and their impact on the financial services industry. Reflecting on Basel III capital standards, he called bank capital requirements a “blunt instrument” and warned they did not guarantee the safety of the financial system. “Paradoxically, the higher we set capital requirements for banks, the more money flows into unregulated or less regulated sectors of the system, thereby increasing systemic risk,” Pandit noted. He urged more transparency across the broader financial system, and proposed a tool for achieving it - a ‘benchmark portfolio’- comprised of commonly held assets across organizations, which would serve to provide more of an “apples to apples” comparison in valuing those assets and measuring an institution’s risk. He said standards and stress tests without such a common measure do not take into account an institution’s risk appetite. His proposed approach, he contended, is more conservative since it gets to the realities behind the numbers, as the crowd as represented by the portfolio is wiser than the expert – the regulator assessing conformance with capital liquidity and other standards.

When asked about the potential effect on the U.S. banking system of a major deterioration of the European sovereign debt crisis, Pandit said that “we should all expect some sort of a GDP impact if you have a demand shock…”, but he countered the U.S. financial system is in a far stronger position than during the financial crisis of 2008.

The final segment, Sovereign Risks and Financial Stability, featured Brazil Central Bank Governor Alexandre Tombini; PIMCO CEO and Co-Chief Investment Officer Mohamed El-Erian; and Harvard University Professor and former U.S. Treasury Secretary Lawrence Summers. Tombini suggested Brazil’s experience with sovereign debt had relevance for the crises facing today’s advanced economies. He urged others to adopt key principles that have served Brazil: be fast as time is of the essence to prevent contagion; have a single, strategic narrative to win confidence of market participants; and respond overwhelmingly with proper force to make the strategy believable, even if it means overshooting the adjustment process. 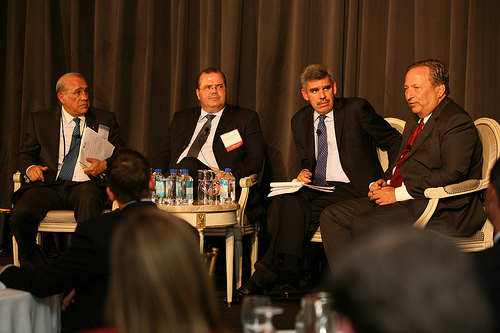 El-Erian argued the only solution to today’s sovereign debt problems in advanced economies is healthy balance sheets. Under the current approach deleveraging has not yet occurred, but rather has been passed to the ‘final’ balance sheets (the central banks). Global actors with healthy balance sheets – such as multinationals and sovereigns in emerging economies such as China and Brazil – need to be convinced, and incentivized, to participate in a global solution. He suggested under the current policy approach, without de-leveraging, we face years of slow growth. He said individual institutions need to become more austere, and restructure debt; and sovereigns need financing without artificial constraints through medium term stimulus and long-term financial reform. The solution he suggested is a health evaluation on a multi-national basis looking at balance sheets at all levels, as we must think and act together, as individually we are intellectually and analytically challenged.

Dr. Summers, attending his 20th annual Bretton Woods Committee meeting, stressed the criticality of this particular meeting and this moment in history, as policymakers deliberate the steps that can prevent today’s sovereign debt crises from leading to a ‘lost decade’ of growth. “Our challenge is not finding the will for collective belt tightening. It’s ensuring growth proceeds at a satisfactory and reasonable rate for the foreseeable future,” he insisted. Summers counselled that barriers to increased output stem not from a lack of capacity, skills, or ideas, but a lack of demand, which must be spurred for economic growth. For the U.S. and Europe, “this is the moment for fiscal action,” he urged, and advised that the appropriate posture of policy must be through enabling confidence, and spending, to return.

Early in his comments, Summers said there are enormous intellectual and political challenges difficulties for forging consensus. He noted that the central irony of the financial crisis – marred by too much confidence, borrowing, lending and spending – is that the way out is more of all of the same. Realizing his comments did not convey “excessive optimism, Summers brought the segment to conclusion by offering that he intended to signal alarm – not for despair, but to drive action by both those in policymaking capacities and among industry observers like him and others.

With the last word on resolving the global sovereign debt challenge, European Central Bank (ECB) President Jean-Claude Trichet spoke of Managing Spillovers on the Global Economy. After hearing the previous panel’s particularly gloomy discourse, he abandoned his prepared comments to answer the dilemmas raised. “We have in front of us a global crisis of sovereign risk and we (the euro zone) are at the epicenter,” he observed.

Trichet warned that in one important way the current situation is more worrisome than in late 2008 when Lehman Brothers collapsed, because today there is no long the belief in markets that key countries would remain solvent. “You must keep the “authority” of the authorities (the central banks) impeccable. If you lose the creditworthiness of the central banks, it becomes a global phenomenon.” He indicated that both standard and non-standard monetary policy by the ECB was crystallizing, and that decisive and swift action is required from all authorities. In the immediate future this includes implementing, fully and rapidly, the measures agreed upon at the 21 July meeting of the heads of state or government of the euro area; adopting sustainable fiscal policies and growth-enhancing structural measures among key sovereigns; and enhancing the consistency of coordination and collaboration.

This year’s extraordinarily timely and topical International Council program was made possible through significant contributions and support from Deloitte, the Bretton Woods Committee’s strategic sponsor. The Committee is also highly appreciative of event contributions from our partner, Barclays, and from Gulf Investment Corporation.