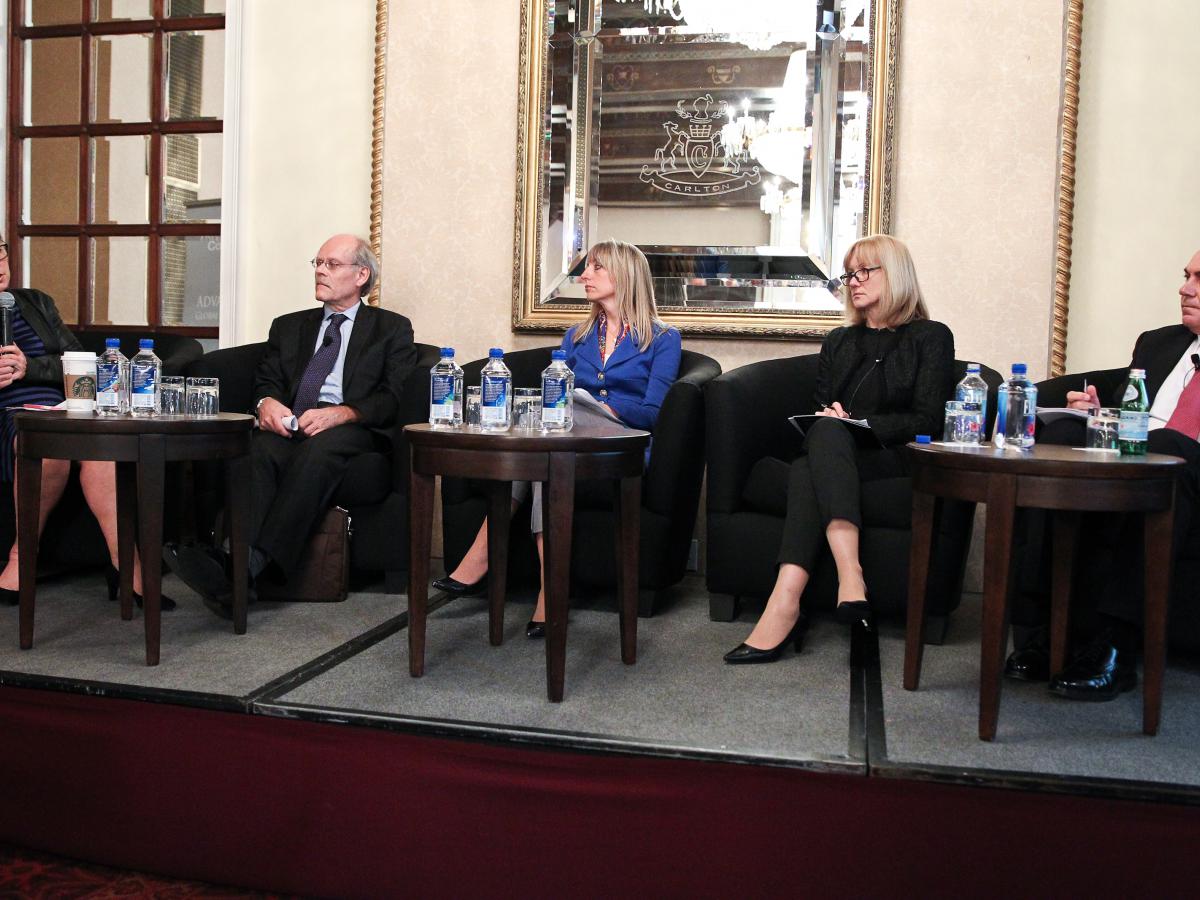 On October 7, 2016, over 200 Bretton Woods Committee members and friends – including leaders from the public and private sectors as well multilateral institutions – gathered at the St. Regis Hotel in Washington, D.C. for the 2016 Bretton Woods Committee International Council Meeting. This year’s program theme – “Navigating Uncertainty in an Uncharted Economic Era” – explored financial stability risks, progress on the harmonization of financial reforms, regional economic development challenges and opportunities, and the future of globalization in an increasingly uncertain world.

Segment 1: The Future of Globalization

Bill Rhodes, member of the Committee’s Advisory Council, kicked off the first segment by asking Harvard University’s Larry Summers to offer his views on secular stagnation and the outlook for the global economy. Summers argued that the main issue with stagnation is that we do not see the end of it nor do we really know what the underlying cause is. Globally, he noted, the economy has substantially slowed down – growth rates have deteriorated, forecasts are continually revised downwards, inflation standards across advanced economies have collapsed, and index bonds are nowhere near the 2% inflation rate. Summers commented on the need to consider policies “out of perspective,” meaning out of the short-run and focus on implementation of structural policies for dealing with long-term problems such as promoting productivity and demand growth.

Additionally, Summers warned that we, as a global community, cannot ignore the rise of populism and its manifested threat to globalization. He recommended a need for a philosophical reconceptualization of the arguments for globalization. The case needs to be more about enabling the government to look out for people and better represent their interests – what he has dubbed as “responsible nationalism.”

For the second segment, US Managing Editor at the Financial Times Gillian Tett moderated a discussion with Stefan Ingves, Sandie O’Connor, Axel A. Weber, and Clare Woodman, on stability and reform in the financial system.

Axel A. Weber, Chairman of the Board at UBS AG and UBS Group AG, asserted that banks are more stable now than pre-crisis, stating “banks have increased capital by a factor of seven and in some cases by a factor of ten.” Despite healthier banks, Weber sees growing risk in financial markets. He argued that it is increasingly difficult for investors to value assets due to central bank intervention and political uncertainty, stating that “political risk, in my view, is the big mover of markets, and that is going to bring a lot of volatility moving ahead.”

Stefan Ingves, Governor of Sveriges Riksbank and Chairman of Basel Committee on Banking Supervision, argued that since the 2008 financial crisis, the Basel Committee has worked to build banks’ capital levels and reduce the concentration of risk. Major banks have increased Common Equity Tier 1 Capital (CET1) by €1.3 trillion since 2010 and the level of leverage ratios are much higher than they used to be. In his view, “we need more emphasis on liquidity than before. Banks are holding €4.5 trillion in high quality liquid assets. There was no focus at all on that in the past. Cash is king but work still needs to be done.” Regarding the potential for “Basel IV,” Ingves said the Committee expects to finish working on capital requirements and a standard risk assessment by the end of the year. However, it is ultimately in the hands of regulators who share different views.

Clare Woodman, Global Chief Operating Officer for Morgan Stanley’s Institutional Securities Group, suggested we should not single out institutions when discussing bank and system safety. She agreed with Weber on the fact that the banking system is significantly stronger and much more resilient than it was even 4-5 years ago. In her opinion, the process of stress testing has been a significant improvement on the regulatory front. On the issue of Brexit and flash crashes, she pointed out that the UK referendum result was unexpected and not priced into the market. In her opinion, there were massive volumes and high uncertainty but electronic systems functioned well, and there was price discovery.

Sandie O’Connor, Managing Director and Chief Regulatory Affairs Officer at JPMorgan Chase, indicated that the market is in a very different place from the pre-crisis norm. “The dynamic of the participants and their behavior are fundamentally different. There is so much more buying and holding of securities in the market place then there ever has been.” She noted that there has been a confluence of events from regulatory reforms, changing and evolving infrastructure, increase of electronic trading, and low and negative interest rates that has caused this change to the market structure and behavior. On the issue of flash crashes, she pointed to the positives – transactions are going through, the market is not stalling and stopping, and liquidity is fine. However, the downside she sees is volatility and a subsequent lack of market depth. “Markets are going to be a little bit more brittle,” she concluded.

Donald Kohn, Senior Fellow at the Brookings Institution and Former Vice Chairman of the U.S. Federal Reserve Board of Governors moderated the third segment on global cyclical and structural risks with Secretary-General of the Organisation for Economic Co-operation and Development Jose Angel Gurria, Deputy Prime Minister and Coordinating Minister for Economic and Social Policies of the Republic of Singapore Tharman Shanmugaratnam, and Honorary Governor of Banque de France and Former President of the European Central Bank Jean-Claude Trichet.

Jose Angel Gurria stated that the OECD projected growth to be at 2.9% and 3.2% in 2017. In his opinion, global growth is low because of growing inequalities, destruction of trust, serious social fragmentation and a perception that globalization is not delivering. He suggested that globalization has been largely successful and often receives unfair criticism; however, global leaders and governments have failed to take threats seriously and monitor the degree of political fragmentation.

Tharman Shanmugaratnam discussed his concerns about private investment levels, which he views as weak all over the world, even eight years after the crisis. He described a situation where there is circularity between the weakness in private investment and productivity growth, and a mismatch between skills acquired and the skills needed for employable jobs. He contended that by raising employment and productivity growth, we will ultimately elevate GDP growth. “We need reforms on structural policies, and in turn these structural policies will stimulate demand by reigniting private investment,” Tharman remarked.

Jean-Claude Trichet discussed the impact of crisis legacies and the excess build-up in public and private debt on persistently low demand. He too suggested implementation of structural reforms, both in advanced economies and beyond, to deal with risks. He acknowledged that this is difficult in today’s political environment because policymakers are being pressured by rising populist movements the world over. “It is the main political problem we all have to deal with,” Trichet stated. In addition to a prescription of structural reforms, Trichet warned that we need to be wary of single models and a one-size-fits-all approach. “We have to be more specific and say: the situation of Germany is not the situation of Spain, Italy, or France.”

The fourth and final segment was moderated by Committee Co-Chair Jim Wolfensohn, former President of the World Bank Group. The panel focused on regional and global economic development challenges and opportunities with H.E. Muhammad S. Al-Jasser, Advisor to the Council of Ministers of the Kingdom of Saudi Arabia, Enrique Garcia, Executive President and CEO of CAF Development Bank of Latin America, and Joachim von Amsberg, Vice President for Policy and Strategy at the Asian Infrastructure Investment Bank (AIIB).

Al-Jasser kicked off the fourth segment discussing the economic situation in the Middle East, noting that the region is tied closely to the global economy. The precipitous decline in oil prices and oil revenues among Arab countries has been a significant challenge that has called for a reengineering of macroeconomic policy. In the past, Mr. Al-Jasser mentioned, the Middle East had a process he referred to as “counter-cyclicality” where countries did not spend all the revenues during prosperous times and saved for the “rainy days.” Al-Jasser indicated that “this time is different” though and that there is an extreme over-supply of oil and weakening demand. Due to this, Saudi Arabia is reengineering its macroeconomic policy to wean off oil-dependency and regain economic efficiency.

Garcia praised the reasonable growth among countries in Latin America over the past decade which was accompanied by a substantial reduction in poverty. An additional regional success story is the inclusion of millions of Latin Americans in the middle-class. However, he contended that Latin American economies have been too tied to a traditional comparative advantage model focused on commodities, and they need to shift to more dynamic and diversified economies. He was concerned with growth outlooks for the region in the next few years and argued that Latin America needs to build a long-term agenda at a country and regional level, with emphasis on infrastructure spending, education and transparency within the public and private sectors. “Latin America has the opportunity to restore its path to growth so that it can be stable, efficient, inclusive, and environmentally sustainable,” he noted.

Von Amsberg discussed Asia, noting that in terms of economic development the region has performed extraordinarily well over the last decades as a result of sound macroeconomic policies and openness driven by trade. However, this broad-based economic success story hides so much differentiation between economies and cultures, and does not underline the countries that have not performed as well in the Asian context, he noted. He looked to the future of Asia by asking two questions: 1) What is the next phase of development in China going to look like?; and 2) Will India pick up the pace and become a driver of regional and global economic development as China has done in the last couple of decades?. Additionally, in discussing priorities of the AIIB as the “new kid on the block,” von Amsberg stressed that AIIB will focus on infrastructure projects in Asia, Europe, and Africa, with the mantra of: 1) Clean (free of corruption); 2) Green (environmentally sustainable); and 3) Lean (efficient).

Special thanks to our Strategic Sponsor:

Special thanks to our Contributor: